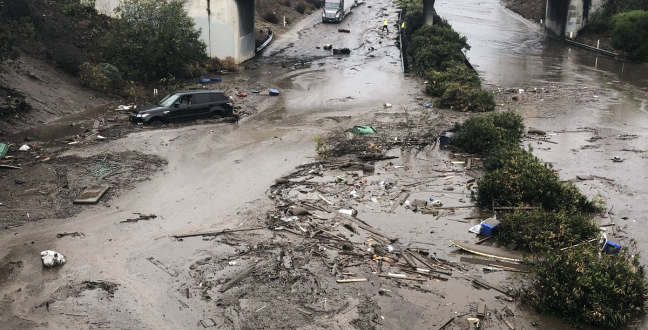 Following landslides that killed at least 17 in Santa Barbara County, search and rescue efforts continue. After being devastated by wildfires, the area experienced flash floods, increasing the risk of mudslides, and destroying entire neighborhoods.

According to the Associated Press, more than 21,000 people were evacuated in the counties of Santa Barbara and Ventura, but flash floods reached further than the required evacuation distance. Unfortunately, many stayed after returning from fleeing the Thomas Fire last month. According to Francis Rengers of the US Geological Survey, hillsides become more susceptible to mudslides after wildfires strip them of vegetation. He also says that the area still faces a large threat because more rain could cause new landslides.

The size and speed of mudslides mean they sound like a freight train roaring down a mountain, Rengers says, “They can move 35 to 50 miles per hour, and some of the boulders that we’ve seen on the ground are the size of vehicles, of trucks.”

For decades, mudslides have become increasingly common in Southern California. After the La Conchita landslide in January 2005 that killed 10 people, the USGS claimed historical evidence showed that equally destructive landslides will continue in the future. Rengers says residents should always listen to evacuation orders because mudslides are impossible to stop or be outrun.

Roger is a junior at Carlmont High School in Belmont, California. Roger serves as an officer of Help Everyone and Remember to Share (HEARTS) non-profit. Roger founded the first California Business Professionals Association (BPA) club at his high school and is active in other STEM related clubs. Outside of his busy school schedule, Roger practices karate, plays saxophone, reads, and volunteers for several worthy social causes in the US and China. Roger is extremely honored to serve as the News Column editor for the Rising Star Magazine.
Previous Joining Too Many Clubs: Is It Worth It
Next The Truth About Nanking Massacre