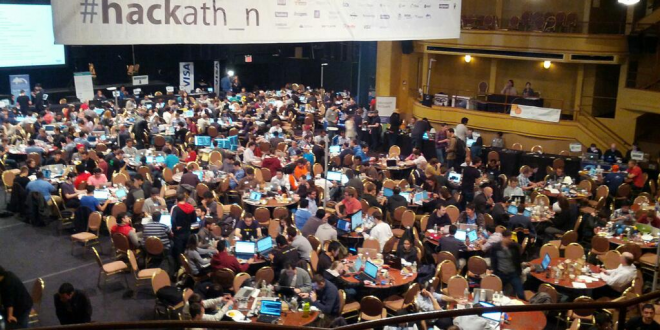 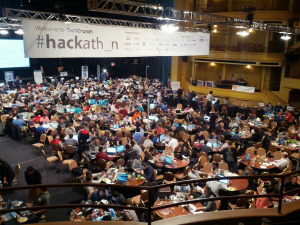 When people hear the word “hacking,” many associate that with illicit activities that exploit various types of modern computer technology.  However, for the many people involved in the tech industry, that’s only what it means some of the time. Hacking often has a completely different meaning – it’s used as a term to describe creating projects from code, whether at home or at events.

Events called hackathons, typically taking place over a weekend, are created to provide a venue where people that have some sort of interest in technology can form teams to work on a new project, more colloquially known as a “hack.” A hackathon hack can come in many different forms, such as an app, a website, or a piece of hardware.

Though you are given a limited time to work, 24 hours can be enough to generate a good idea and code a working prototype.  At the MHacks winter 2014 hackathon, held in Michigan, a team of four got together to create an app called Workflow, which won first place and best iOS app. When the team released the app in the Apple App Store almost a year after, it rose in popularity to become the #1 paid app for a while, and is currently an Editor’s Choice pick. Though Workflow isn’t part of the top ten paid apps anymore, it is an exemplary example of reaching success through putting in work at a hackathon.

Hackathons normally start with a team, either pre-made or randomly set up, which then tries to portray their idea with code.  Throughout the weekend, teams try to learn as much as possible to code the best possible product before presenting their idea to others.  24 hours or 36 hours may seem like too short of a period to make a quality hack, but people can really create amazing things even within this time constraint.

The first hackathon I went to was HSHacks, a hackathon in the Bay Area at Paypal HQ.  The moment I walked in I knew it would be unforgettable: the environment was so different than what you might find at school or around friends.  Everyone was camped out in random places with their teams, and that in itself was comforting, since it gave an impression of leniency.  At first, I was nervous, but who wouldn’t be, if this were their first time at this kind of event?

Despite the environment of everyone trying to make the best hack possible, there wasn’t any pressure to win.  Hackathons are for learning, networking, and having fun.  There are different workshops you can attend, to increase your knowledge in the capabilities of a language, or maybe to gain exposure to a new language.  You can also get mentors to help out, so that you can get someone to guide you along the right path towards the end product.  These workshops were made not only to teach, but also to advertise, as many of the workshop hosts brought different things such as stickers and T-shirts to give out to the attendees.

Networking is also an important aspect at hackathons, since people can potentially meet other talented coders who can prove to be useful connections later in life.  You can build connections with people who are very likely to be successful in the future, and meet companies of all kinds.

Learning and networking are certainly big parts of hackathons, but the overall idea is having fun. The cool thing about hackathons is that the poeple that attend aren’t forced to by their parents; they attend because they really want to.  Hackathons are pretty widely known for unhealthy eating and lack of sleeping, but it’s all worth it when you learn so much in so little time, and meet new people with whom you share interests.  The reason why people keep coming back for hackathons, whether near or far, is because they’re enjoyable to participate in.  It’s satisfying being able to create a quality hack in so little time and showing it to others.

If you’ve never experienced what it’s like at a hackathon, I highly recommend that you go to one nearby. They really are lots of fun and are definitely unforgettable because they’re just so different. As one of the very cliche sayings go, you’ll never know unless you try!

Previous How to be Healthy
Next Benefits of Chess