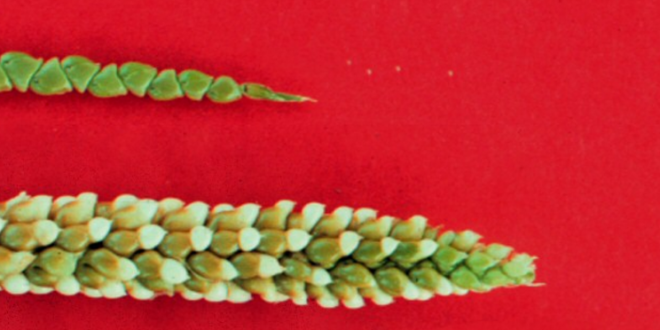 Would you like your corn to look like this? Probably not… But that’s what corn before selective genetic modification would have looked like. GMOs have been in our food supply since the 1990s, but, some are demanding their labeling for various unfounded reasons. While large portions of the public desire the labeling of GMOs; ultimately, GMOs have shown no adverse effects but benefits when compared to their non-GM counterparts. According to Colorado State University, “for several thousand years, farmers have been altering the genetic makeup of the crops they grow”. Practices involving the modification of an organism’s genetic material is not new, and not any more harmful than traditional methods.

We have been modifying plants for a long time, and, GMO modification is not that much different from what we had done in the past. The only difference is that now we are harnessing new technology to achieve an even greater degree of variability to emphasize desirable traits. GMOs can be a solution to the eventual food shortage as the human population increases, and also the pollution and harm to the environment due to the mass use of pesticides, overfishing, or the like.

To those who argue that GMOs are harmful for the environment, according to Joe Schwarc, who wrote the book Is That A Fact, “before the introduction of glyphosate-resistant crops, it was common to use as many as ten different herbicides, most of which had worse toxicological profiles than glyphosate”. In this sense, GMO crops not only decreased the amount of pesticides used but also made weed control easier, more effective, and allowed for greater crop yields. GMOs represent the modern version of what farmers have done in the past, and are not dangerous.

Additionally, GMOs provide benefits above their non-GM counterparts. According to the Heartland Institute, approximately 800 million people on planet Earth are currently malnourished, and an additional 2 billion people are expected to populate the world by 2050. According to the Hank Green, the host of SciShow, GM crops and animals can solve these problems of hunger. For example, according to SciShow, “around 500,000 children go blind every year because of Vitamin A Deficiency”. Through the use of GMOs, a strain of rice, called “Golden Rice”, was developed that contains enough Vitamin A to keep children healthy– supplying and solving malnourishment problems through the consumption of GMO crops.

While GMOs can help nourish the population, they are also able to help solve overfishing. Just recently, “[the FDA] recently approved the genetically engineered AquAdvantage salmon [which] came after a long process of study beginning in the 1990s”. Not only is the AquAdvantage salmon the longest-studied and most thoroughly tested and vetted food product in FDA’s history, it is also, according to William Muir, professor of animal sciences at Purdue University, a good development because he states, “The current practice of using wild caught salmon as a food source is not sustainable; our oceans are overfished. [And this] development provides a safe and sustainable alternative”. GMOs can provide nutrients as well as satisfy the growing population on Earth with more sustainable farming methods.

As a conclusion, GMOs are potentially a viable means of helping the environment as well as those who live on Earth. By providing a reasonable solution to solving world hunger and reducing overfishing and the use of pesticides. In this sense, GMOs may be the holy grail to solving some of the environmental and farming issues that we are beginning to face. We should exercise caution in pursuing the use of GMOs as a solution, but, it is definitely possible that GMOs are the answer to new problems.

Cindy is senior at Henry M. Gunn High School and is incredibly honored to be a part of the Rising Star Magazine team. She enjoys belting out Disney songs, playing piano, watching Chinese dramas, and babysitting. Cindy serves as California DECA's VP of Silicon Valley and is also the singing teacher at FCSN and the President of HEARTS Nonprofit. She can be contacted at cindy@risingstarmagazine.com
Previous Protein and Hair Growth
Next Waking up in the morning