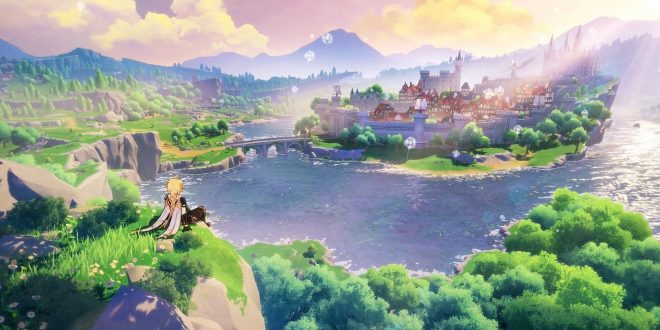 “Embark on a journey across Teyvat to find your lost sibling and seek answers from The Seven — the gods of each element.”

Genshin Impact, a multiplayer open-world game, has gotten quite popular in the past few months, attracting many players with its storyline, the characters, and the world. The game features 2 main characters: Aether and Lumine, twins who have traveled across many worlds but are one day separated by an unknown god. Players have the choice to select which twin to play as. (The storyline has no relation to which twin you pick.) You find yourself in the land of Teyvat and find statues of different elements as you explore the world and try to find your twin.

As mentioned in the first paragraph, many players enjoy it because of the characters, not just because of the storyline. In Genshin Impact, there are more than 30 characters you can have and play as. Each has its unique character design and they have an element out of the 6: Geo (earth), Electro (lightning) Pyro (fire), Cryo (ice), Anemo (wind), and Dendro (nature). Each character also has its own storyline which you can explore while playing the game. Popular characters may include Kaeya, Diluc, Xiao, Zhongli, etc.

Despite it being a Mobile game, its scenery is beautiful and realistic. It can also run on a PC, which makes these graphics much smoother than a phone. There are seven nations in Genshin: Mondstadt, Liyue, Inazuma, Sumeru, Fontaine, Nathan, and Snezhnaya, each being ruled by a god. You can climb any mountain, talk to any NPC, swim across lakes, and investigate every inch of the world. The gorgeous art style, ever-changing weather, real-time rendering, and character animations help to make everything come alive. The soundtrack, performed by the London Philharmonic Orchestra, changes over time when you enter different areas and encounter different creatures, further adding to the effect.

Beyond the previous points, there are so many more things for you to explore. You can play with friends as well and enjoy a co-op experience. It is a free-to-download RPG game, and I recommend any fan of fantasy or action to give it a try.

Previous How You Can Live a Happier and Healthier Life During COVID-19
Next U.S. Nuclear Submarine Collides With Underwater Object