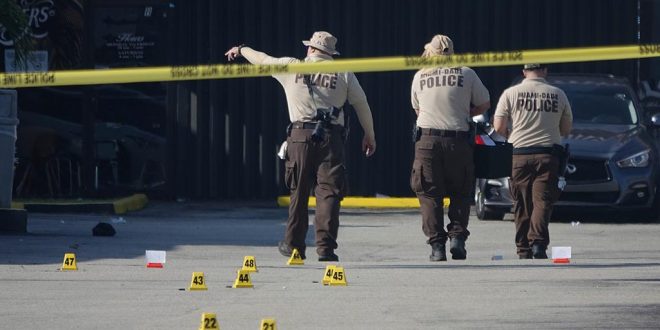 On May 31st, 2021, three perpetrators opened fire at a Florida club early in the morning, killing at least 2 people and wounding at least 20 more, according to Miami-Dade Police Department Director Alfredo Ramirez III.

Shortly after midnight, a white Nissan Pathfinder pulled up to the El Mula Banquet Hall near Hialeah and three people “stepped out of the vehicle with assault rifles and handguns and started firing indiscriminately into the crowd,” Ramirez said. “The result is 20 to 25 victims with gunshot injury wounds, and two deceased on the scene.”

The Miami-Dade Police Department is asking anyone with information on the suspects or their whereabouts to contact authorities. “These are cold-blooded murderers that shot indiscriminately into a crowd and we will seek justice,” Ramirez tweeted. “My deepest condolences to the family of the victims.”

TV personality and Camping World CEO Marcus Lemonis is also offering a $100,000 reward for people who come forward with information leading to the arrest and conviction of those responsible for the mass shooting.

The police director has thanked Lemonis for his offer and has reminded the public that anyone providing information can stay anonymous through contacting Crime Stoppers.

On Sunday, Ramirez said in a tweet that the Miami division of the Bureau of Alcohol, Tobacco, Firearms and Explosives added an additional $25,000 to Lemonis’ reward, bringing it to $125,000.

An earlier shooting on Friday night in the Miami area left at least one person dead and six injured in Miami’s Wynwood district. Police said they are searching for a silver Nissan Maxima that is reportedly tied to the shooting.

Florida Governor Ron DeSantis offered his condolences to the victims of those attacked in the latest shooting on Sunday: “We mourn the loss of the two victims and are praying for the recovery of the more than 20 people injured at El Mula Banquet Hall near Hialeah,” tweeting, “We are working with local authorities to bring justice to the perpetrators.”

Previous Are Superteams Killing the Game?
Next Sugar: Wolf is Sheepskin?