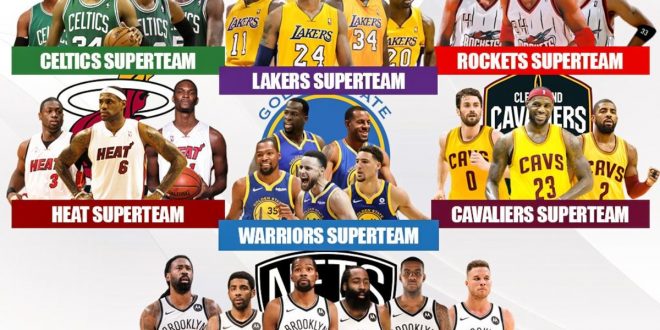 Are Superteams Killing the Game?

Over the recent years in sports, mainly the NBA, one question has been bounced around. “Are Super Teams killing the NBA”. A superteam is one where there are multiple superstar players in it. Not just great players, but the best of the best. Teams like the 2000’s Lakers, the 2000’s Heat, the Warriors, who had 5 All-Star players including MVP Steph Curry, MVP Kevin Durant, Defensive player of the year Draymond Green, and sharpshooter Klay Thompson. The question has finally arisen once again with this year’s Nets. Every player being one of the very best in the entire league. But why is this a bad thing, and why are fans complaining about this?

Players like Damian Lillard have never failed to speak truthfully. On a podcast, he said that “I’d rather go out there and put my best foot forward and lose before I do that [playing on a superteam], because I know I can win if I do that.” His approach shows that these teams are being bought, not developed. The Nets superteam came together in less than a month. They were nothing, and then became top contenders for the NBA Championship. Lillard’s reasoning does not seem to be shared by many others though. Everyone wants to win a title, and would do anything to get there. Many players want to be a part of such a powerful team, but never find it fair when they have to play against one.

Many fans are also disappointed by these superteams. Not only would they be upset if their team had to face one of these, but it is just not fun to watch. An example that I like to use is this: “Winning is great. But it is not nearly as fun when it is too easy.” It is fun to watch close games. It is much more interesting to see a last second buzzer beater to end the game rather than it is to watch one team blow out another.

The one way to get rid of these superteams is by getting rid of the max contract a player can sign. The max contract as of now is 38.5 million. Teams are paying this big of money for players like Lebron James, Stephen Curry, Kevin Durant, etc. But, by taking this out, players of this caliber will expect more from the teams. This means that if players are being paid 60 million dollars, 60% of the teams cap space is already eliminated, which in turn means that they would have to pay less for the other players, resulting in selecting worse players. Though this might never happen, it is one very simple and possible way to fix the superteam sham that many fans and players hate.