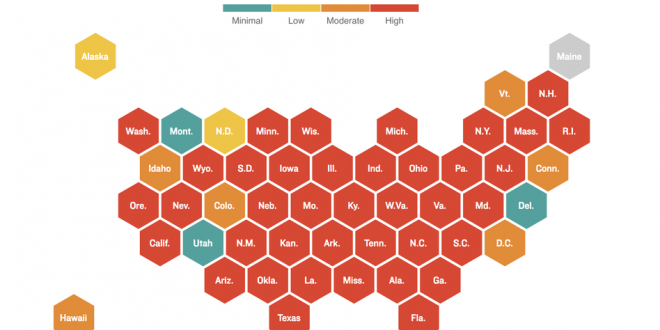 On Friday, Jan. 27, the Center for Disease Control and Prevention (CDC) stated that the current influenza outbreak has killed 53 children nationwide and has led to the highest measured hospitalization rates for the virus, especially for senior citizens. The CDC further stated that the current dangerous flu season is continuing across the U.S.. The outbreak is declining in the western states, but growing stronger on the East Coast.

The current flu outbreak is a mixture of three strains: H3N2, H1N1, and influenza B. While lab tests nationwide are showing a decline in positive tests for H3N2, which is the most active strain this season, the CDC reported increases in the amount of influenza B infections. The CDC noted that we may have many more weeks to go. The outbreak currently is at its 10th week of high activity. In the past, flu seasons typically last up to 20 weeks.

This year’s flu vaccine is not working well against the H3N2 strain due to a genetic mismatch between the vaccine version of the bug and its wild form. The Canadian vaccine efficiency is estimated at 17% only, well below the estimated 30% effectiveness in the U.S. vaccine.

Nevertheless, the CDC still urges people to get vaccinated, noting that vaccinated people who get the flu typically have less severe symptoms. Only 20% of the children who have died in the current season were already vaccinated. Parents are urged to remind their children to wash their hands. Children with difficult or rapid breathing or a high fever should see a pediatrician. It also warns that particularly dangerous cases are characterized in which recovery is halted by a return of symptoms and perhaps a dangerous secondary pneumonia.

Roger is a junior at Carlmont High School in Belmont, California. Roger serves as an officer of Help Everyone and Remember to Share (HEARTS) non-profit. Roger founded the first California Business Professionals Association (BPA) club at his high school and is active in other STEM related clubs. Outside of his busy school schedule, Roger practices karate, plays saxophone, reads, and volunteers for several worthy social causes in the US and China. Roger is extremely honored to serve as the News Column editor for the Rising Star Magazine.
Previous Mistakes as Lessons
Next Carb Crashes