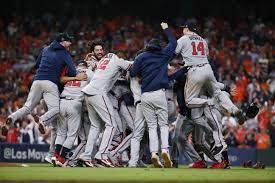 The World Series is the MLB, Major League Baseball, championship that occurs every single year since 1903. Atlanta’s first major sporting championship in a while came with a blast as the Braves took the MLB champions against the Astros. The Tuesday night of game six that the Braves would be crowned World Series champions as they didn’t allow a single homerun in the 7-0 drive. The Braves did not back down to the challenge despite their loss the previous game 9-5. By the third inning. Jorge Soler had already hit a three run homer that gave them a hopeful defining lead. He was the biggest part of the Braves win as he was named finals MVP.

With the 14.3 million nationwide viewers, the Braves pulled off a spectacular win to bring their name back into the major leagues since 1995. This was a jump from the 9.1 million viewers. But what made this win so special for both them and their fans was the unlikelihood of all of it. They had only won 88 games in the seasons and with the injury of Ronald Acuna Jr., their star player, things did not look great for them.

The tortured sports city was not rejoicing in a win. Despite the Braves having won more games than any other team in the Nation league from 1996 to 2020, and the Hawks having made three dozen playoffs in half a century, as well as the Thrashers moving and the Falcons tough loss, Atlanta seemed to just not be able to pull anything off. Though there was no logical relation between the 2016 Atlanta Falcons loss to the patriots and the 2021 Braves win, this could be the lifting of the curse that has haunted Atlanta sports for a long time.

But, with winning comes the celebration with fans. The parade route took the Braves through miles of fans who went through downtown Atlanta and back to the Braves’ home park. Though the bus went a little faster than normal parade buses should go, they had fun with their fans nonetheless, especially Joc Pederson who won the World Series on the Dodgers last year but was not able to have a parade due to Covid protocols.