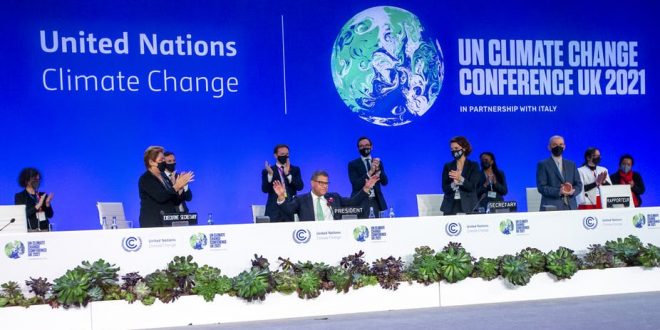 Almost 200 nations reached a climate agreement on November 13th with the COP26 with an unprecedented statement over the contributions of fossil fuels towards the climate crisis, even following a last-minute objection by India over the reduction of coal usage.

For years, the COP has failed to recognize that the climate crisis has been caused by the usage of fossil fuels, with coal being the single largest source of greenhouse gases and recognition of that fact was one of the main objectives of COP26 President Alok Sharma.

However, despite the progress achieved, it still does not reach the level of urgency that has been expressed by scientists in their “code red for humanity” report on the climate crisis that was published earlier this year. In fact, the COP26 has deferred much of the action regarding reducing fossil fuel usage to next year. The UN’s Intergovernmental Panel on Climate Change has stated that worldwide emissions need to be halved within a decade.

Sharma formalized India’s requested amendment, changing the text from a phasing “out” of coal to a phasing “down”. The text also used language centered on finding replacements for fossil fuels.

Sharma told delegates that he was “infinitely grateful” for their help in “keeping 1.5 alive”, alluding to his goal of containing global climate change to 1.5 degrees above pre-industrial levels as a maximum.

Scientists have said that this limit is critically important in order to avoid worsening effects of the climate crisis and to avoid a climate catastrophe.

However, the COP26 has already been criticized for not being enough. It has turned out that current pledges from the COP26 get about a quarter of needed goals done.

Regardless of how much progress is made, the COP26 is an important step for humanity and momentum that scientists hope will continue in order to alleviate the climate crisis.