Home / Lifestyle / Bluefin Tuna: Popularity May Lead to its Demise 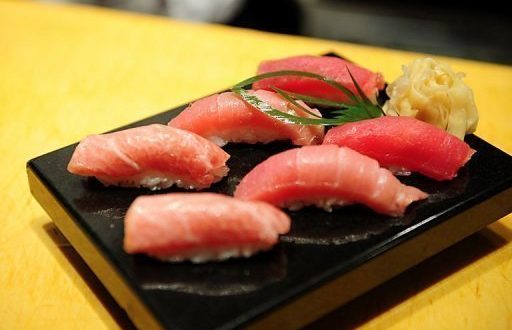 Bluefin Tuna: Popularity May Lead to its Demise

Northern bluefin tuna (hon-maguro, or simply maguro in Japanese) mainly consists of the Atlantic Bluefin Tuna and the Pacific Bluefin Tuna species. They are popular menu items in sushi restaurants in Japan, as well as around the world. Those familiar with sushi would know that the bluefin tuna has a red meat with hardly any fishy taste; therefore, it is easy to eat raw, especially for beginning sushi eaters. Furthermore, the fatty belly meat of the bluefin tuna, well-known for its delicious taste and soft texture, is one of the most expensive menu items. However the popularity of this sushi menu item leads to overfishing, which may very well be the cause for its demise. 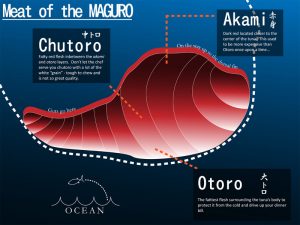 Bluefin tuna is a predatory fish that can grow larger than 1,000 lbs, and have a lifespan of 40 years. Prior to the 1970s, it was actually not a popular item in restaurants. The Japanese have been eating sushi since the 1840s, but they prefer white meat fish because red meat fish tend to spoil faster. So, in the past bluefin tuna was not used much for sushi. Similarly in the US, bluefin tuna was mainly used for cat food in the past. Starting in the 1970s, sushi restaurants started to pop up in the US that popularized tuna. Around the same time, the Japanese started to develop a taste for fresh bluefin tuna. Modern commercial fishing boats are equipped with refrigeration facilities so that the bluefin tuna meat can be kept fresh for a long time.

In the decades after 1970s, the popularity of bluefin tuna grew. The Pacific Bluefin Tuna is typically smaller than the Atlantic Bluefin Tuna, but they typically fetch a higher price, especially those caught during their migratory run in the strait of Tsugaru in Japan that connects the Pacific Ocean and the Sea of Japan. The strait is full of squids, which are the favorite prey of bluefin tuna that increases the fat content of their meat. In sushi restaurants, tuna meat is typically categorized into akami, which is the cheaper, redder and less fatty side meat, and toro, which is the more expensive less reddish and fatter belly meat. Toro is further categorized into chutoro and otoro. Chutoro is the belly meat closer to the side which has more fat content (less reddish) than akami but less fat content (more reddish) than otoro. Otoro is the least reddish belly meat and has the most fat content and will melt in your mouth when eaten. The popularity of bluefin tuna reached its peak in 2013 when a 220-kg tuna was auctioned for 155 million yen ($1.09 million at the time). However, the buyer, a wealthy owner of sushi restaurants, bought it mainly for bragging right and was surely losing money at that price.

Unfortunately the popularity of bluefin tuna has resulted in the sharp decline of its population despite the fact that the use of fishing nets was abolished a long time ago. The Atlantic Bluefin Tuna has been declared an endangered species since 2011, and the Pacific Bluefin Tuna has been declared a vulnerable species since 2014. The efforts of many conservationist groups have resulted in many countries imposing quotas for bluefin tuna. Fisheries do not help the situation either because they operate by catching young tuna, growing them in the farms, and harvesting them before they could reproduce. Only recently were researchers in Japan able to successfully breed bluefin tuna; however it is still far from being able to sustain the mass consumption.

Lastly, for sushi lovers, it is also worth keeping in mind that large saltwater fishes such as the bluefin tuna have long life spans and therefore have higher risk of mercury contamination, meaning it is best to consume these fishes in moderation. The popularity of bluefin tuna has declined slightly since its peak in 2013, but it is still heavily consumed. Let us hope that the bluefin tuna popularity does not result in its demise.

Previous Phones Are Precious, But Your Life More So
Next The Harvey Weinstein Problem