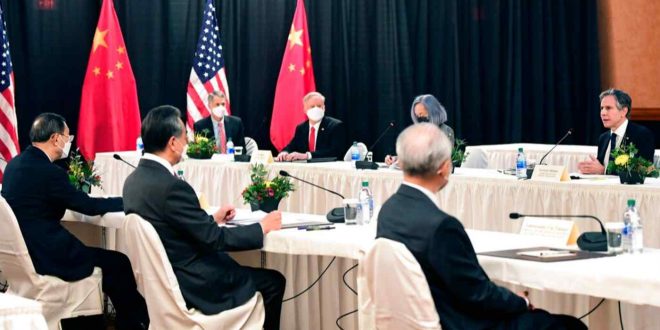 In the first face-to-face meeting between US and Chinese officials, diplomats traded barbs on Thursday as U.S. Secretary of State Antony Blinken’s statement that the Biden administration would bring up “deep concerns” about some of China’s actions around the world was met by equal force from Chinese counterparts, sparking an unusually public exchange of diplomatic barbs.

The Chinese diplomats later accused the U.S. delegation of being “condescending” in its tone, while a US official called the representatives from Beijing “intent on grandstanding”.

Behind closed doors and following the public clash, a senior administration official said the first session of official diplomatic talks “was substantive, serious, and direct.”

“After the pool spray, Secretary Blinken opened the discussion, and both sides immediately got down to business,” the same official stated in an interview. “In fact, the discussion went well beyond the 2 hours we had allotted… We used the session, just as we had planned, to outline our interests and priorities, and we heard the same from our Chinese counterparts.”

However, the outset of the meeting quickly veered away from the usual diplomatic throat clearing that takes place before talks move behind closed doors. As the two sides traded intense remarks, Blinken called the cameras back to counter the Chinese officials’ comments – in particular slights about U.S. democracy – setting off an unexpected chain of rebuttals as each side responded to the other’s remarks.

In his opening remarks, Blinken initially said the US intends to defend the “rules-based order” without which there would be a “much more violent world” and said that Chinese activities in places like Xinjiang, Hong Kong and Taiwan, as well as its cyber attacks on the US and economic coercion of US allies, “threaten the rules-based order that maintains global stability. That’s why they’re not merely internal matters, and why we feel an obligation to raise these issues here today.”

Regardless of the incidents at the meeting in Anchorage, we will have to wait and see what actions the Biden administration will take in this “biggest geopolitical test of the 21st century”.

Previous What is Crew?
Next “Invisibility” Cloak