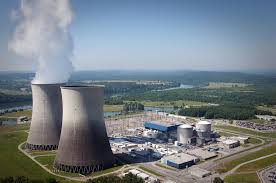 So how does a nuclear power plant work? Most Americans think of radiation, contamination, and fall- out when they hear nuclear energy. However, energy from a nuclear power plant is derived much differently than most people think. A nuclear power plant is basically a giant steam engine. Through a process known as fission, fissionable nuclei such as Uranium-235 and 238 split multiple times. This generates heat, which in turn converts the surrounding water into steam. Because no fuel is being burned, the process is very clean and would not pollute the environment. Some nuclear waste (such as waste coming from thorium) that is produced can also be mostly recycled for even more energy. The mass amounts of steam drive the turbine to produce electricity. Also, radiation is not an extreme problem as only 0.005% of the dosage of radiation of America comes from nuclear power plants, which is around 100 times less than the amount of radiation given from coal power plants. Even if radiation and contamination are not as big of problems (they are still problems), many people are still being tormented by the thought that another nuclear disaster would happen. It most likely would not happen. Safety standards at this time are extremely effective in keeping nuclear plant failures from happening. Even if a failure happened, there are concrete shells around the nuclear plant to prevent radiation to spread. So far these measures have proved to work as there have been no wide-spread nuclear disasters in the US since the 21st century. Nuclear energy will last us enough years to discover a new way of creating energy according to scientists, which means that nuclear energy is the way to go.