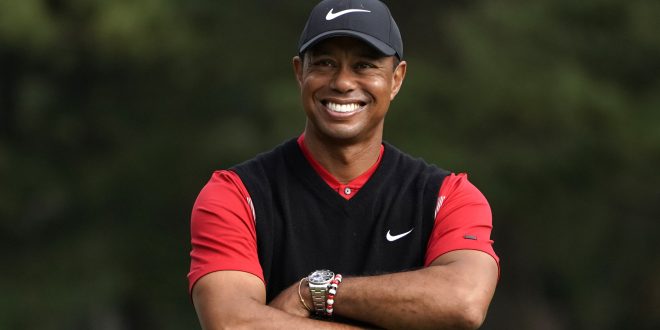 FILE - In this Oct. 28, 2019, file photo, Tiger Woods smiles during the winner's ceremony after winning the Zozo Championship PGA Tour at the Accordia Golf Narashino country club in Inzai, east of Tokyo, Japan. A man who found Woods unconscious in a mangled SUV last week after the golf star who later told sheriff's deputies he did not know how the collision occurred and didn't even remember driving, crashed the vehicle in Southern California, authorities said in court documents. Law enforcement has not previously disclosed that Woods had been unconscious following the collision. (AP Photo/Lee Jin-man, File)

At the end of November, Tiger Woods gave Golf Digest an interview to discuss his future on the Pro golf Association (PGA) tour.  Tiger, 45 years old, was active on the professional golf circuit until his car accident back on February 23rd of 2021. Tiger was driving his SUV at 87 MPH, almost double the legal limit, when his vehicle crashed. Tiger has had previous car crashes and injuries, but this time he suffered severe comminuted open fractures of the to his leg. Both the tibia and fibula were broken into multiple pieces and portions penetrated through the skin. Foot and ankle injuries were also involved. Since then, it has been in question as to whether the golfer with one of the greatest winning records on the PGA would return to the sport that he transformed.

Woods has a history of physical challenges from which he has, time and again, recovered. In his early career, his eyesight was extremely myopic and he had to have corrective laser surgery. Again in 2007, his eyesight continued to worsen, requiring further laser surgery. Over his career, Woods has had a series of other physical problems, including, knee, shoulder, elbow, ruptured ACL, torn Achilles tendon, plus neck and back injuries. The back injuries and pain ultimately required spine fusion treatment. In 2017, Woods was arrested for driving under the influence. He reported that this was not due to alcohol, but “an unexpected reaction to prescribed medications” for severe back pain. Yet, throughout these years of pain, he has consistently performed at a high level. But the most recent injures from the car crash have changed that.

Woods told Golf Digest that he would no longer play the pro golf tour full time, but that he did think he would be able to play a few select events every year. He says that he has accepted this as his future. This marks the end of and era.