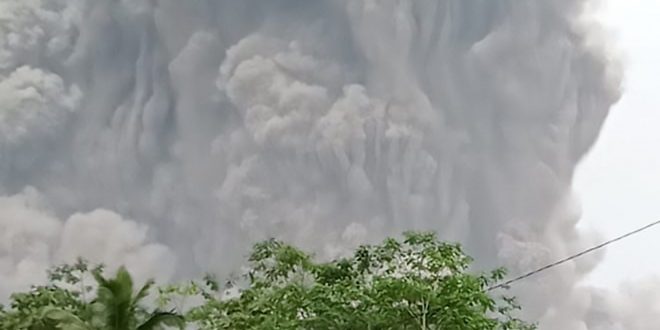 According to recent reports from authorities, fourteen people are confirmed dead and dozens have been injured, after the eruption of Mt. Sumeru on the island of Java.

Rescuers are still working to find survivors in villages buried underneath ash.

Houses were buried to their rooftops and vehicles were submerged completely.

At least 11 villages in Lumajang, in East Java, were coated in volcanic ash, and at least 56 people have been injured, mainly from suffering burns after mistaking the hot mud flow for flooding.

“There were 10 people carried away by the mud flow,” said Salim, a villager living in Kampung Renteng. “One of them was almost saved. He was told to run away but said ‘I can’t, who will feed my cows?”

Another man searching for survivors said that 10 people had gone missing in his village. Many relatives of victims in Lumajang, eastern Java, have said that they have not been able to find their loved ones as their bodies have not yet been identified.

The disaster mitigation agency (BNPB) said that around 1,300 people were trapped, and 10 sand mine workers who were trapped in buildings have saved. Rescue shelters have been providing food, masks, tarpaulins and body bags.

Evacuation efforts have been severely hampered by obstacles of choking smoke, power blackouts, and rainstorms during the eruption which turned volcanic debris into mud. A major bridge from the area to the nearby city of Malang was also severed during the eruption.

Mt. Semeru is a heavily active volcano, and Saturday’s eruption was a notable increase in eruption intensity.