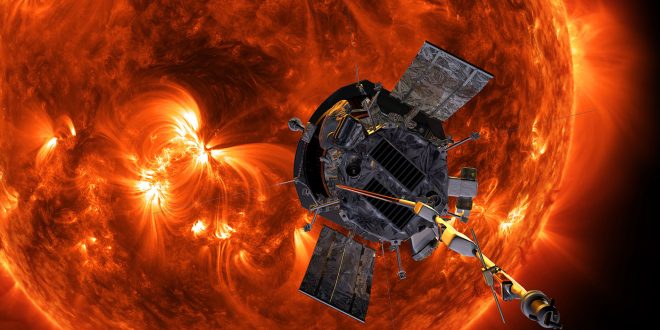 Scientists have been experimenting flying towards space to other planets to discover a new world or a new society. With the ever worsening environmental condition on earth due to pollution, humans may choose to migrate to another planet if there is a viable option. There have been ample space travel projects focused on traveling to planets other than Sun, but traveling to Sun is a more novel idea.

It is agreed on that Earth constantly orbits around the Sun. This concept was originally proposed by the Renaissance-era Polish mathematician and astronomer Nikolaj Kopernik who modeled the universe by placing the Sun, rather than the Earth, at the center of the universe. Kopernik was among the earlier astronomers who established the heliocentric theory. Earth’s atmosphere supports Earth by reflecting most of the solar-rays back to the Sun, helping Earth avoid the Sun’s damaging effects. The surface of the Sun is at 5500 Celsius degree and the temperature in the Sun’s core is hundred times higher than that of the surface. Although technology has improved drastically in the past few decades, the Sun’s harsh conditions makes it hard for the scientists to imagine to travel the Sun.

Some might think it would be less hot during the night in space, but that is just a common misconception. In the space, the Sun is always shining and releasing heat. According to NASA, an advanced space expedition agency, scientists has already developed a solution and can send a rocket to the Sun intact. The experiment is named the Packer Solar Probe Mission. The launch occurred at night on November, 2018. This is the fastest rocket ever, and also the first rocket that is able to fly through the Sun’s atmosphere.

There had definitely been some problems that scientists have to cope with in the spacious space. They made the rocket with a special material that could handled under an extreme hot. Some advanced technology combining carbon fibers and petrochemical-derived polymers. Since the mission is unprecedented due to high temperature on the Sun, the rocket did not carry any astronauts.

We may not think that anything useful could be accomplished during the expedition. Maybe nothing will be found, or we might think it’s a waste of money, since it’s impossible for humans to migrate towards the Sun. However, this expedition contains a significant meaning. This is the first time that any human would somewhat reach the Sun. Scientists might found some key answers as why the inner core of the Sun is hundred times hotter than the atmosphere. We look forward to more developing technology and scientific researches. Maybe one day, traveling to the Sun would become normal.