Home / Opinion / The Psychology of Arguments 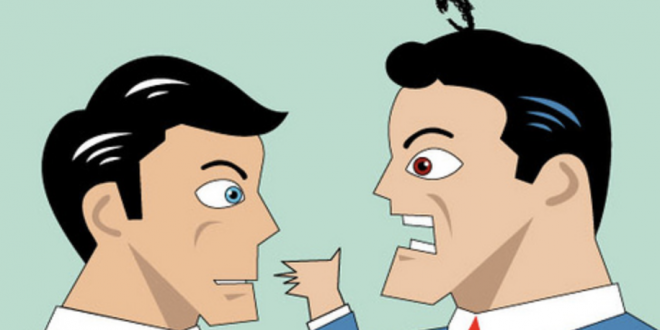 The Psychology of Arguments

When we’re arguing, things seem pretty simple. The opponent has some argument, we have another. Through some sort of discourse, we’re supposed to come up with a kind of “solution” or answer to our conflict. Debates seem to be a relatively common occurrence in our lives; as a result, they are equally important to do right.

Through everyday competitions, people are locked into this idea that situations are always win-lose: that someone must emerge as the winner from a battle, and the other must be figuratively “thrown to the ground.” We can easily see this in arguments. When one side provides some argument supporting their opinion, the other must quickly think of something to respond, and this cycle goes on and on, seemingly unstoppable. Yet when we take a step back and look at the bigger picture of the situation, it can almost look ridiculous. In order to establish some mutually agreed “truth,” we engage in word battles no matter how illogical our arguments might sound just for “being right.” And yet it’s often observed that this mutually agreed truth is never really mutually agreed on, as both sides are indignant and unwilling to give in to a mental change. At this point, it’s crucial to really think about the purpose of argumentation, our motivations, and what we expect to get out of it.

Arguments start out simple with common ideas or events. For example, a very cliché example is the usual child asking to adopt a dog. The initial conflict is understandable: the child saying a dog would be good company, the parent saying the child isn’t responsible enough. It seems decently reasonable. Then as the debate escalates, emotions usually enter the picture and the arguments get wilder and more ridiculous. In some situations, people can end up making bewildering points or even denying claims outright without providing a reason. But what do the two parties want to gain out of this? Is it a solution to the issue at hand? Usually, arguments start off as a sane discussion to become upfront shouting matches. More significantly, this is caused by a shift in the debaters’ motivations. What started off as an effort to find a solution to a problem ended in a mental battle to the death on who could emerge victor from a war of tirades. People make wilder and wilder statements just to “prove their point,” even if they know they’re wrong, even if they haven’t fully processed what the other side is explaining. Their goal becomes to somehow assert dominance, or make their previous opinion “truth,” rather than to come to a real solution or answer.

But this isn’t how it should be. It’s easy to get wrapped up in our emotions and ego, forever wanting to prove that we were right from the beginning. Once we think deeper, however, we realize that actual issues are more important than who’s right or who’s wrong. That doesn’t matter. What does matter, and what does cause change, are the decisions we make as a result of those arguments. People need to learn to take a step back and think carefully about the other side’s arguments, and then weigh the benefits and harms. It does no one good to let emotions take control as opposed to logic. It’s okay to admit or concede; in fact, that’s the only way arguments have led to productive ends. If the child begging for that pet dog realizes that she can’t take care of it, or maybe if the parent realizes she’s just being paranoid, solutions could be more easily found and implemented. It’s not about conceding, it’s about looking at all valid arguments as significant points that must be weighed equally. Only by breaking the tendencies of human nature can we have productive arguments that create impactful societal change.