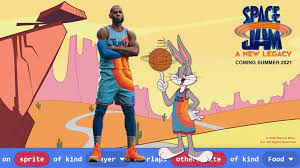 Space Jam has been widely regarded as one of the most famous comedic sports movies ever. This action packed film starred Michael Jordan, as he enlisted the Looney Tunes to help him win a basketball match against aliens. This movie was released in 1996 by Warner Bros, grossing over 250 Million dollars worldwide. Many praised the achievement of blending digitally live action and animation.

Now, the sequel, Space Jam: A New Legacy, is coming out July 16th, 2021, staring the new generation of basketball players including the great Lebron James. The Premise is that Lebron James and his son Dom are trapped in a virtual space by a rogue algorithm named AI-G Rhythm. Lebron must get them home safe by leading Bug Bunny, Daffy Duck, Porky Pig, Lola Bunny, and the whole Looney Tunes gang to victory over the Goon Squad, the digitalized champions of the algorithm.

The Spacejam  franchise has been here before. Twenty-five years ago, the original was more than a surprise slam dunk — it was a pop culture juggernaut. Inspired by Nike’s “Hare Jordan” ads, the film followed Chicago Bulls legend Michael Jordanand Looney Tunes frontman Bugs Bunny as they teamed up with the rest of the Tune Squad to take down the Monstars, a squad of undersized aliens who stole the mojo of Jordan’s fellow NBA greats. The result was a win for everyone involved: Warner Bros. scored a $230 million hit, not to mention a billion-dollar merchandise empire; the soundtrack went six times platinum; and Jordan cemented his status as a global icon. “It felt like a real cultural moment,” says New Legacy producer Ryan Coogler, who proudly recalls performing the film’s track “Hit ‘Em High” at his middle school talent show.

Warner Bros. hoped to follow Space Jam with a sequel. But Jordan wasn’t interested, and attempts to move forward with other celebrities, such as Jackie Chan and NASCAR driver Jeff Gordon, stalled. The studio eventually delivered 2003’s Looney Tunes: Back in Action, a commercial failure that halted any future big-screen adventures for Bugs & Co. That is, until a new potential star emerged.

Previous Thursday Ends Green with the S&P 500 Breaking 4,000 points for the First Time in History
Next Abolish the Capital Gains Tax