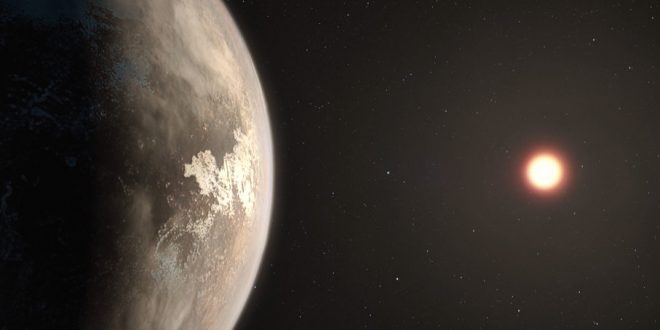 Ross 128 b is a planet found orbiting the red dwarf star Ross 128.  The planet was discovered by a European telescope, using the radial velocity method, or using the wobble in stars caused by planets to deduce the planet’s features. It is approximately 1.4 times the size of Earth, is 20 times closer to its sun than Earth is to our sun, and orbits in 9.9 days. Its composition is rocky and has a predicted surface temperature that allows liquid water to exist. Whether or not this planet is tidally locked, or if one side continually faces the star while the other continually faces away from the sun, making the planet uninhabitable, has not yet been discovered. This new planet, scientists believe, is also in its star’s habitable zone, but differs from other habitable planets scientists have discovered before. Red dwarf stars are the most common type of stars in the universe, but they can be prone to deadly solar flares. After observing the star Ross 128, scientists discovered that it was less prone to flares. Additionally, Ross 128 b is only 11 light years away, making it the second closest solar system to Earth. By comparison, the closest solar system to Earth is Proxima Centauri, which is 4.2 light years away. Not only is this new planet relatively close to Earth, but it is also moving towards Earth, and is estimated to become the closest solar system to Earth in about 80,000 years. Ross 128 b has enormous potential for life, and can possibly be habitable by humans.

Roger is a junior at Carlmont High School in Belmont, California. Roger serves as an officer of Help Everyone and Remember to Share (HEARTS) non-profit. Roger founded the first California Business Professionals Association (BPA) club at his high school and is active in other STEM related clubs. Outside of his busy school schedule, Roger practices karate, plays saxophone, reads, and volunteers for several worthy social causes in the US and China. Roger is extremely honored to serve as the News Column editor for the Rising Star Magazine.
Previous A High School In China – Interview a Teacher in Beijing
Next Living a Simple Life