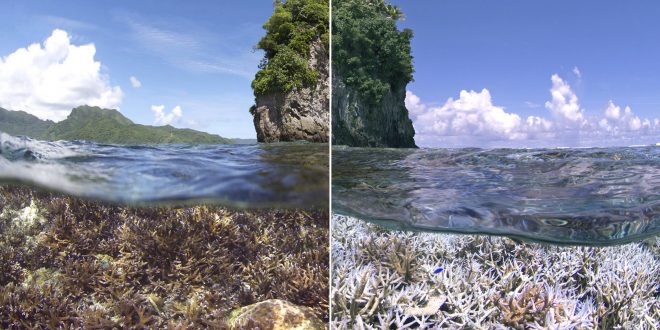 Coral reefs, often referred to as biodiversity hotspots, hold many oceanic activities and house numerous species. In fact, although coral reefs represent about 1% of the total oceanic area, they are home to about a third of oceanic species.

Nonetheless, as a result of global warming, they, too, face an uncertain future. Climate change, according to scientists, is the primary cause of coral damage around the world.

Corals can’t withstand very high temperatures, so as the ocean warms, they become “sick.” This form of thermal stress will cause coral to bleach, which means they lose their vivid colors and turn white or very pale.

Although corals can survive bleaching events, they are more likely to die in this condition.

The before and after photographs from 2015 represent an episode of coral bleaching in American Samoa, a Pacific Ocean territory.

“Severe bleaching and mortality occurred on shallow inshore and [lagoon] reefs along southern Tutuila [American Samoa’s largest island]”, according to a US team of scientists at the time.

The team also said that “[t]he effects of high temperature stress are compounded in these shallow environments due to reduced water circulation.”

However, the condition of the reefs in this region is currently rated as “good.”

The word “coral” refers to a number of aquatic invertebrates (animals without backbones). They have a rigid outer coating (exoskeleton) consisting of calcium carbonate, which is the same substance shells are made of.

From coastal seas to the frigid polar regions, they can be found all over the world. Coral reefs, on the other hand, can only be found in the wet, shallow waters of the tropics. The Great Barrier Reef, which extends for 2,300 kilometers off Australia’s north-eastern coast, is the most well-known of these.

Healthy coral has a symbiotic relationship with zooxanthellae, which are microscopic algae. The algae help their hosts grow food in exchange for being able to remain in the corals’ strong, calcium carbonate exoskeleton. The bright colors we equate with stable coral reefs are also provided by Zooxanthellae.

The mutually advantageous relationship, though, breaks down when the oceans warm and the fragile aquatic environment gets ill or depressed.

The algae “jump boats,” depriving the coral of its primary source of nutrition. As a result, the coral turns white or very pale, making it more susceptible to pathogens.

As a result, coral bleaching is a visible and drastic symptom of a reef under stress.

The major source of bleaching, according to the US National Oceanic and Atmospheric Administration (NOAA), is a rise in ocean temperature as a result of climate change.

Coral reefs have a worldwide worth of £6 trillion per year, according to the Natural History Museum in London.

This is due in part to their participation in the fishing and tourism sectors.

Furthermore, coral ridges serve as walls, reducing wave energy by up to 97 percent and providing vital protection to coastal areas from threats such as tsunamis.

They assist in the protection of aquatic animal nurseries such as mangrove forests and seagrass beds, as well as human coastal populations.

As a result of climate change, an Australian government survey downgraded the Great Barrier Reef’s outlook from “bad” to “extremely poor” in 2019.

The most significant danger to the coral, according to the study, is that sea temperatures are increasing because of human-caused greenhouse gas pollution.

The reef was declared a UNESCO World Heritage Site in 1981 for its “enormous scientific and intrinsic value,” but it has been steadily harmed in recent years by warming waters, which have destroyed reefs and harmed the reef’s long-term health.

According to researchers at the National Oceanic and Atmospheric Administration, if the bleaching isn’t too serious, the coral will regenerate.

Scientists, on the other hand, are worried that we are moving vulnerable aquatic environments beyond their capacity to cope. This suggests that ecological wonders like the “rainforests of the oceans” might be nearing the end of their lifespan.

Previous The Power of Choice
Next Thursday Ends Green with the S&P 500 Breaking 4,000 points for the First Time in History