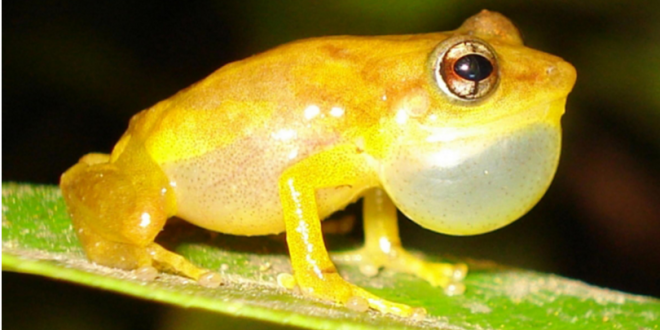 A Silver Lining Amidst Economic Crises? 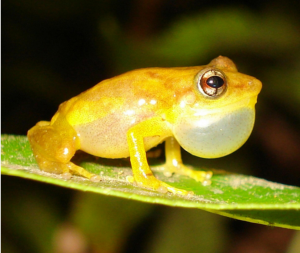 Recession has halted many forms of environmental destruction for the time being, and several endangered species are rejoicing.

The Puerto Rican debt crisis has temporarily put a stop to large-scale building projects that have had a history of recklessly dumping toxic wastes in the environment. Fortunately, populations of lowland coquí, a butternut squash-colored frog (pictured above), are stabilizing during this pecuniary slump.

“The financial crisis here is generally something that has been positive for conservation,” says Raimundo Espinoza, The Nature Conservancy’s Puerto Rico conservation coordinator.

A number of other species are also recovering due to pauses in urbanization.

Oil and gas companies are losing incentive to drill as oil prices are declining; inversely, the wellness of the endangered greater sage grouse is on a positive incline. In fact, ecologists now have the opportunity to collect data and better understand the grouse and other wildlife for when the drilling picks up again.

Just when it seemed that hope was lost for the moapa dace, an endangered species of fish that inhabits the few bodies of water in the Las Vegas Valley, salvation was found in the 2007 mortgage crisis that came to be one of Nevada’s biggest real estate disasters. Due to a reduction in groundwater pumping by a lower demand for hookups to homes, the moapa dace population was able to triple within five years.

Another housing crisis took place in California during the Great Recession, which allowed the endangered Delhi Sands flower-loving fly to benefit from a slow in development of its habitat.

Despite improvements, economic decline can only temporarily provide solace to these waning species. In the long run, many changes need to be put in place in order to avoid extinction. For instance, there are plans for the lowland coquí to be bred in captivity in hopes of establishing a stable population of them elsewhere in Puerto Rico.

Cindy is senior at Henry M. Gunn High School and is incredibly honored to be a part of the Rising Star Magazine team. She enjoys belting out Disney songs, playing piano, watching Chinese dramas, and babysitting. Cindy serves as California DECA's VP of Silicon Valley and is also the singing teacher at FCSN and the President of HEARTS Nonprofit. She can be contacted at cindy@risingstarmagazine.com
Previous Skincare and more
Next What’s the deal with ads during the Super Bowl?