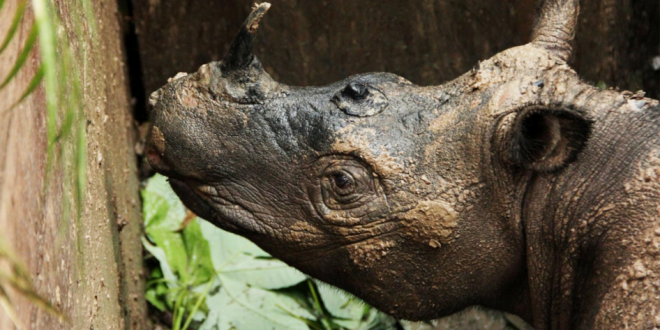 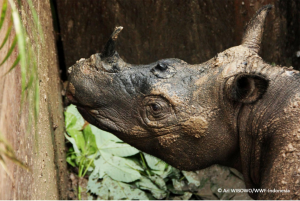 For the past forty years, Sumatran rhinos had been thought to be extinct in Kalimantan, the Indonesian segment of Borneo. In a fortunate turn of events, the World Wildlife Fund (WWF) declared that they had successfully and safely captured a female Sumatran rhino in Kalimantan. The WWF announced this as a “major milestone for rhino conservation in Indonesia.”

The four to five-year-old rhino was captured using a pit trap in Kutai Barat (East Kalimantan) on March 12th. At the moment, the rare rhino is being held in a temporary enclosure before being airlifted to a more secure area about 93 miles away. These procedures will ensure the rhino optimal protection from poachers in what authorities hope will become the second Sumatran rhino sanctuary located in Indonesia. In fact, there are already plans for starting a more stable breeding population; at least three other animals are predicted to be relocated to the sanctuary.

“We now have proof that a species once thought extinct in Kalimantan still roams the forests, and we will now strengthen our efforts to protect this extraordinary species.” Dr. Efransjah, CEO of WWF-Indonesia, said in a statement.

The Sumatran is the smallest of the world’s five species of rhinos. What makes them even more elusive is that their coloration is dark red-brown and that their habitat is generally dense mountain forests, which renders it difficult to distinguish rhino from landscape.

Only about 100 Sumatrans are estimated to exist in the wild, primarily on the island of Sumatra, making them one of the rarest mammals on Earth. The Sumatran population dwindled as a result of poaching and loss of habitat from deforestation, mining, and other causes. Just last year, the rhino was stated to be extinct from the Malaysian portion of Borneo.

Nilanga Jayasinghe, the WWF-US lead on Asian species, says, “Given the dire situation of Sumatran rhinos in the wild, it is crucial that isolated individuals such as this female become part of a managed breeding population to ensure the future of the species.”

The longevity of the Sumatran rhino species is a race against time at this point.

Cindy is senior at Henry M. Gunn High School and is incredibly honored to be a part of the Rising Star Magazine team. She enjoys belting out Disney songs, playing piano, watching Chinese dramas, and babysitting. Cindy serves as California DECA's VP of Silicon Valley and is also the singing teacher at FCSN and the President of HEARTS Nonprofit. She can be contacted at cindy@risingstarmagazine.com
Previous The deets on pet allergies
Next Discovering yourself