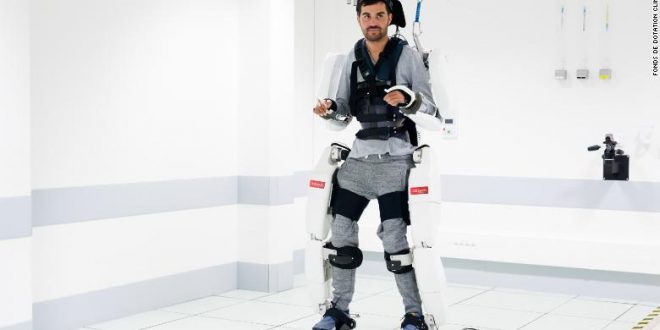 Recently, a study was performed by French scientists. They tested a brain-controlled robotic exoskeleton called “Ours”, a device seemingly out of science fiction. Although this gadget is still a prototype, the experimenters have already published results from one trial run with the suit. They helped a 28-year patient, paralyzed waist down after a 40 ft fall, use the system they designed to allow him to walk again. The results were originally published in The Lancet, as a study meant to help those who have been paralyzed after receiving spinal cord injuries.

The suit contains brainwave sensors, implanted within the skull but still outside of the brain itself. This in itself was revolutionary, as previously, the detection of brainwaves required extremely invasive techniques that were implanted within the brain itself and prone to malfunctioning. The implanted sensors were additionally wireless and required little maintenance or hassle. The sensor would detect the brain waves emitted by the motor control section of the brain and would convert them into movement in the suit. However, the translation isn’t a simple process. It required over 2 years of training for the suit to be able to predict the actions its users wanted. The training started with performing simple tasks such as flicking a virtual lever or playing a game of pong. The complexity was slowly increased as simpler control was obtained, eventually resulting in total movement of the exoskeleton with just the user’s brain.

Although still at a primitive stage, the creators see a lot of possibilities for both the brain sensor and the exoskeletons. The sensors could be implanted into those who use wheelchairs or other related devices and help people control them. This would allow people who are completely paralyzed to have some kind of mobility. The team also hopes that the suit will eventually be able to move by itself, and give its users true control over their bodies.

Previous Hating Hate
Next The Nourishment Your Eyes Need