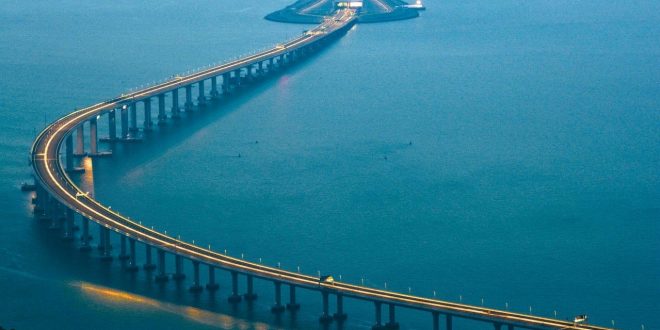 Recently in October, the Zhuhai Bridge spanning the distance between Hong Kong and Macau formally opened and President Xi Jinping of China has attended the opening ceremony. The $20 Billion project began in 2009, and in February, after nine years of construction, is complete. The bridge is spans 34 miles (55 km) and is the sixth longest bridge in the world but the longest sea crossing bridge. The Danyang-Kunshan Grand Bridge is currently the longest bridge in the world, used as a viaduct for high-speed train transportation. It is 102 miles(164 kilometers) long and also located in China. Interestingly, eight of the nine longest bridges in the world are in Asia, and seven of those are in China or Taiwan. The new bridge between Hong Kong and Macau is extremely convenient, reducing the travel time from three hours to 30 minutes. However, private car owners in Hong Kong will need a special permit to cross the bridge. Without this permit, they will have switch to shuttle bus or special rental cars at the Hong Kong port before leaving. The Hong Kongese have criticized the Chinese government for this project as they believe it will bring in more tourists from mainland China through Macau to an already crowded Hong Kong. Critics of the Chinese Government think of it as a remainder to Hong Kong, which is semi-democratic, that the Chinese Government still has a strong grip on them. The crowded city suffering from lack of housing and poverty also had to fund almost half of the $20 Billion project. Albeit controversial, the bridge is a major engineering feat, able to withstand a magnitude eight underseas earthquake, normal typhoons, and strikes from large ships. The project was completed with the help of land reclamation, which is endangering the Hong Kong Pink Dolphin. The government of Hong Kong did sponsored the creation of aquatic parks for conservation, though some say it was too little, too late for it to have an impact. Safety standards of construction workers building the bridge have been questioned after seven workers died and 275 were injured during the construction. The bridge, although a major engineering feat, is criticized by some for its negative impacts on Hong Kong and marine life.