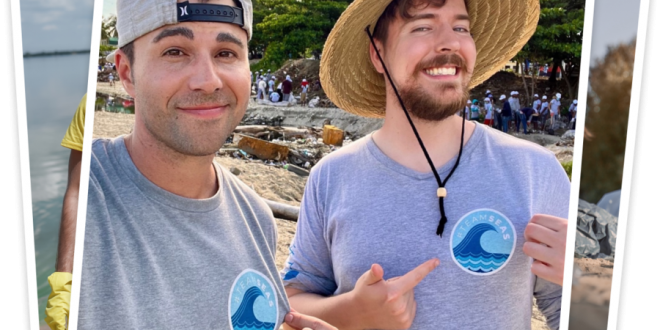 A little over a week ago, Jimmy “MrBeast” Donaldson started a global campaign called “Team Seas” with the ambitious goal of raising 30 million USD to clean up 30 million pounds of plastic in the ocean.

Jimmy is currently the most famous philanthropist on Youtube, known for donating colossal amounts of food, money, clothes, and other items to those in need.

Last year, Jimmy started the “Team Trees” campaign after achieving the 20 million subscriber milestone on his YouTube channel. The campaign succeeded to raise over 20 million USD to plant 20 million trees in various locations around the world.

Now, Jimmy and Mark have partnered with two non-profit organizations to make possible the removal of the 30 million pounds of trash. At first, they contacted the Ocean Conservancy, an international NGO known for organizing massive volunteer-led efforts to clean beaches and ships to go first-hand to the oceans. Right now, they are focused on the Giant Pacific Garbage Patch, an enormous “island” of microplastics. Microplastics are plastics worn down by the sun and the waves that are small enough to be consumed by marine wildlife. Currently, many fishes we eat every day have consumed microplastics sometime in their lifetime, making their meat toxic – not fatal to humans, yet. Additionally, most of the fishing gear is made of nets, which are the culprit of the number of wildlife that often becomes trapped in them, including dolphins, turtles, and whales.

The second organization they have partnered with is The Ocean Cleanup, which has been developing technologies to clean the oceans with the least amount of energy and, recently, developing their Interceptor technologies. After heavy research, The Ocean Cleanup has found that around 80% of all the trash that enters the oceans come from just 1% of the rivers in the world. Mr. Beast and Rober’s aim is to provide 15 million USD for the NGO to continue developing more Interceptors and prevent more trash from entering the oceans.