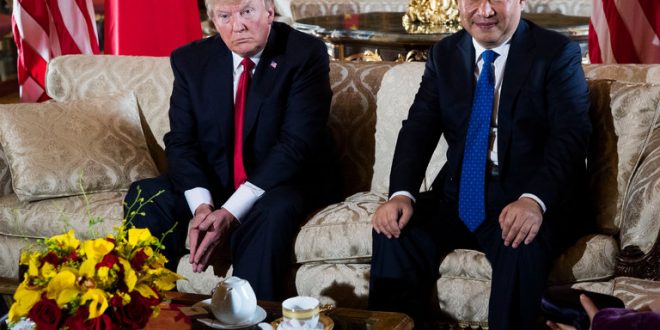 On Thursday, April 6, 2017, Chinese President Xi Jinping arrived at Trump’s Mar-a-Lago resort in Palm Beach, Florida for his two-day visit. The meeting got off to a cordial start. Xi and his wife, Peng Liyuan, joined Trump and his wife, Melania, at a private dinner. Trump’s daughter Ivanka and her husband Jared Kushner, who both work at the White House, also were among the dinner guests. Trump and Xi were expected to get into more detailed discussions about security and trade issues on Friday, concluding their meeting with a working lunch.

The most urgent problem facing Trump and Xi is how to persuade nuclear-armed North Korea to halt unpredictable behavior like missile test launches that have heightened tensions in South Korea and Japan. The second most urgent issue is trade. The United States’ trade deficit with China has swelled to more than $300 billion a year. While displaying a cordial relationship in public, behind the closed door, President Trump is expected to aggressively press his counterpart on both issues.

Trump has threatened to use trade to force China to exert influence over Pyongyang. Beijing says its influence is limited and that it is doing all it can. The White House is reviewing options to pressure Pyongyang economically and militarily, including “secondary sanctions” against Chinese banks and firms that do the most business with Pyongyang. It is believed any military action would likely provoke severe North Korean retaliation and massive casualties in South Korea and Japan, as well as U.S. troops stationed there.

On trade, Trump has often complained that Beijing undervalues its currency to boost trade, but his administration looks unlikely to formally label China as a currency manipulator in the near term – a designation that could come with penalties. It is believed that Trump will take a direct, unambiguous tone in his talks in order to come away with concrete deliverables that will restore production and employment in the U.S. in sectors that have been ravaged by China’s predatory and protectionist policies. Washington may consider using legal tools to fight for U.S. companies, such as pursuing World Trade Organization lawsuits.

Contrary to the Washington argument, Chinese President Xi Jinping brought with him a big message: “Don’t blame China for your problems.” Xi is expected to emphasize that China has contributed greatly to the U.S. economy. His argument is supported by statistics and those figures have been widely circulated in the Chinese state press. From Beijing’s perspective, China’s trade surplus does not necessarily benefit China while the United States loses. About 40 percent of the trade surplus is actually generated by U.S. companies in China. Other statistics often repeated by China include: bilateral trade and investment created 2.6 million American jobs in 2015 and each American family saves $850 every year thanks to cheap Chinese goods.

It has yet to be seen if the two-day meeting will lead to a path for constructive dialogue and assurances to allow the China-U.S. relationship to remain on a stable course.

Previous Qingming Festival
Next Comfort In The Classroom