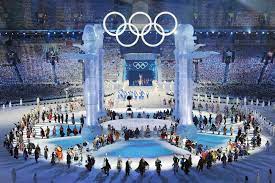 The 2022 Winter Olympic Games are upon us. On February 4 th , the athletes gathered at the Beijing “Bird’s Nest” stadium. Even with the threat of the current Omicron Covid variant, Beijing was able to welcome the athletes, with a lively and artistic opening ceremony. In a nod to the pandemic, they put on the show with 4000 performers, only a quarter of the number used in the 2008 Beijing Summer games, to limit the potential spread of Covid. The theme was one of world unity and the shared struggle with the global pandemic. Interestingly, the multimedia light show began with a celebration of the coming of spring with 400 performers holding long green LED rods the seemingly swaying like grass in a gentle breeze and then opened like a blossom. This was followed by the image of a huge “virtual” block of ice, created by 24 laser beams representing the 24 th winter Olympics, which melts away to reveal the five ringed Olympic symbol. The parade of athletes included 224 America athletes, the second largest number ever to attend a Winter Olympics. But the parade show-stealer was the shirtless American Samoa flag bearer who braved the freezing temperatures with a layer of oil to make his torso shiny. The
artistic portion of the show continued after the parade. The theme was revealed through images of common world struggle with the pandemic. This transitioned into ice skaters traversing the stadium floor to a version of John Lennon’s Imagine, slowly revealing the words: Faster, Higher, Stronger, Together. At one point the images of individual flakes seemed to float down, each having the name of a participating country. Then a huge snowflake constructed of the many smaller snowflakes bearing the
names of the participating countries appeared. These all framed a central opening for the lit Olympic torch. The snowflake was lifted to the sky. Fireworks began a dazzling display high above the “Birds Nest” stadium. Overall, a spectacular display of technology and artistry to open this 24 the Winter Olympic Games.