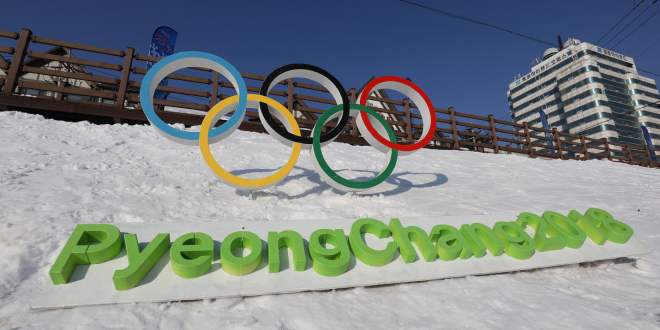 On Thursday February 8, 2018, the world’s best athletes will compete in the most prestigious competition of winter sports at the 23rd Olympic Games in PyeongChang, South Korea for 17 days. Despite escalating military tensions between the U.S. and North Korea as well as the Russian doping controversy, the 2018 Winter Olympic boasts vast, modern facilities for the 102 sporting events and offers hopes for unity between the North and South Korea.

Located just 50 miles from the Korean Demilitarized Zone that separates North and South Korea, PyeongChang is a rugged, mountainous region in the Gangwon Province known for its snow sports. To prepare for the games, South Korea has built six new venues and refurbished seven others in three different areas in the province. PyeongChang, home of the Olympic Stadium, will host the Opening Ceremony, Closing Ceremony, and many of the snow sports; Jeongseon, a former mining area will be home to the Alpine speed events and downhill skiing courses; and Gangneung, a resort town and bustling coastal city will host the ice skating, speed skating, and hockey competitions. In total, these venues will host 102 events of over 15 sports. Of those, six events in existing sports will make their debut in PyeongChang: Big Air Snowboarding (men, women), Curling Mixed Doubles, Mass-start Speed Skating (men, women), and Alpine Skiing national mixed team event. More importantly, as of January 2018, International Olympic Committee (IOC) officials report that all venues including the Olympic Village are ready for the games, an impressive achievement considering that organizers of the previous Winter Olympic, Sochi, were scrambling to finish hotels and venues on time.

While most of the world looks forward to seeing nations compete for the gold in the Olympics, the 2018 Winter Games have been shrouded by fear over the safety of the games due to the current political climate. With President Trump and North Korean leader Kim Jong-Un having a number of heated exchanges that escalated the threat of a nuclear war, France, Austria, and Germany considered keeping their athletes at home unless South Korea’s security is guaranteed. In response to these concerns and amid rising tensions over nuclear tests by a series of missile launches conducted by North Korea during the summer, South Korea’s President Moon Jae-in promised that the country would strengthen security at the Winter Olympic Games. Even so, only France confirmed its participation while Austria and Germany have yet to decide on attending. The U.S.’s National Hockey League also withdrew from the ice hockey competitions citing security concerns.

Adding to PyeongChang’s plummeting popularity, on December 5th 2017, the IOC has decided to ban the Russia from the 2018 Winter Olympics, allowing only athletes who have complied with the IOC’s doping regulations to compete under the Olympic Flag as an “Olympic Athlete from Russia,” (OAR). Russian government officials are forbidden from attending, and neither the country’s flag nor anthem is allowed. One week prior to the opening ceremony, 169 Russians including well-known figure skaters such as Evgenia Medvedeva and Alina Zagitova passed the IOC’s screening process and were invited to the 2018 Winter Games. However, the absence of other famous athletes such as Viktor Ahn,  a six-time gold medalist short track speed skater and Alexander Tretiakov, 2014 gold medalist in the men’s skeleton, would highly disappoint sporting fans and negatively impact the ticket sales of the host country.

In a surprising turn of event, on January 9th 2018, North Korea announced that it will participate in the Winter Games, sparking hopes for easing political tensions after months of escalating missile tests and Pyongyang’s rapidly advancing nuclear ambition. The two nations will show sign of unity by marching together under Korean Unification Flag during the opening ceremony. A Unified women’s ice hockey team will also compete under a separate IOC country code designation.

Though the Olympics have long been a pathway into geopolitical contentions, its original motives have been to bring about peace and cooperation, a way to demonstrate that the world’s nations and athletes can come together, set aside conflicts, and focus on athleticism and achievements during the duration of the games. While world leaders and other politicians remain skeptical about North Korea’s gesture, there is a strong hope among South Korean officials and athletes that North Korea’s unpredictable leader, Kim Jong Un, will be less likely to behave provocatively during the Olympics if his country’s athletes are participating in the games.

Megan is a senior at The Harker School. She is interested in applied mathematics, computer algorithms, artificial intelligence, cognitive vision science, and economics. Outside of school, she is a tutor and mentor at the Boys and Girls Club of the Peninsula (BGCP), a regular volunteer at Second Harvest Food Bank (SHFB), classical pianist, and an avid figure skater. In her free time, she enjoys exploring hiking trails in the Bay Area and Lake Tahoe, reading science fiction books, WIRED and The New Yorker magazines.
Previous Restoring the Bee’s Knees
Next School Lunches