Home / Sports / What is Happening Between Aaron Rodgers and the Packers. 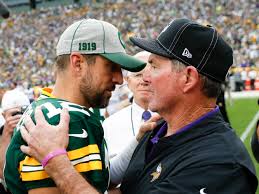 What is Happening Between Aaron Rodgers and the Packers.

The standoff between the Green and quarterback Aaron Rodgers continues with very little being said by either side. But one NFL executive may have summed up the situation best. One anonymous NFL executive with general manager aspirations said that the Packers “kind of screwed themselves” by overplaying their hand with Rodgers. He said that because the Packers decided not to give Rodgers the kind of security he wanted, he may just not show up for the team in 2021.

“They kind of screwed themselves,” the executive said. “You play with fire, you get burned. He’s smart enough to know they did kind of hedge and basically say, ‘If he’s not playing well this season, we’re going to move on.’ He’s really trying to call their bluff. To them, why should we guarantee beyond 2021? But look at the situation. Because they didn’t do that, understanding who they’re dealing with, now they’re in a situation where the dude might not show up.”

The executive went on to suggest that the situation may reach the point where Rodgers simply demands a move, regardless of what the Packers offer to make him stay. The executive suggested that this has become a game of poker. And the Packers must decide how much they want to give him. “This is like the realest game of poker,” the executive said. “He’s all in and he’s trying to make you go all in. You’re either going to push all your chips in and say, ‘I’m all in’ and see if you call his bluff. Based on what I know, I would dig in and make him show up.”

Aaron Rodgers has been the Packers’ starting quarterback since 2008 and has given Green Bay over a decade of superb football. He’s a three-time NFL MVP and rapidly approaching many of Brett Favre’s historic franchise passing records.

On top of his individual accolades, Rodgers has delivered the Packers a Super Bowl, seven NFC North titles, and four additional trips to the NFC Championship Game.

But this situation is getting more complicated by the week. The longer the Packers take to resolve it, the harder it may be to bring Rodgers back.