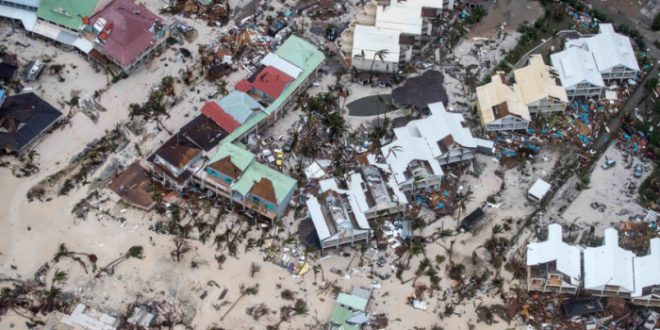 In the wake of Hurricane Harvey, another swirling storm has made its appearance: Hurricane Irma.

The storm is one of the strongest on record, maintaining wind speeds of 185 mph for over 24 hours and also maintaining its Category 5 status for 3 days, tying Hurricane Andrew for second longest time holder at that level. The humongous hurricane has already devastated the Caribbean as it churns its way to Florida, which has already declared a state of emergency. At least 20 deaths have been reported, with the number expected to rise. Now, Irma remains on the path to hit Florida as Category 4, and with its massive size, it threatens to engulf most of the state. The National Hurricane Center predicts that the hurricane is on track to move west and make landfall in the Florida Keys, and has issued life-threatening storm surge warnings to most of central and southern Florida. Rainfall poses a serious flash flood risk to the Florida Keys, which sit below sea level. The center has also anticipated heavy rainfall not only in Florida, but in Georgia, South Carolina, and western North Carolina as well. Eric Silagy, chief executive of the Florida Power and Light company, has stated that power outages are expected to affect 4.1 million customers, or about 9 million people.

Irma, which comes in the aftermath of the destruction already caused by Harvey, demonstrates the serious risk that major storms pose to this country, as well as the fact that preparations need to be made in anticipation of these events. This fact is even more significant, as appearance of severe weather is expected to become increasingly common in the coming years. Cleanup efforts for Harvey have barely begun, and a second natural disaster strains the resources of the government and other organizations. It is important to stay safe and prudent to prepare for the future.

Roger is a junior at Carlmont High School in Belmont, California. Roger serves as an officer of Help Everyone and Remember to Share (HEARTS) non-profit. Roger founded the first California Business Professionals Association (BPA) club at his high school and is active in other STEM related clubs. Outside of his busy school schedule, Roger practices karate, plays saxophone, reads, and volunteers for several worthy social causes in the US and China. Roger is extremely honored to serve as the News Column editor for the Rising Star Magazine.
Previous Learning through Documentaries
Next Partisanship in the US