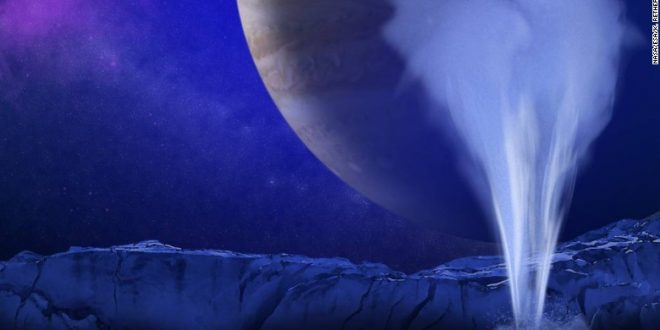 NASA is trying to find other planets that can possibly support life as data has shown that Earth’s time is limited. Therefore, NASA has turned its eye towards Jupiter’s one of many moons for water and safety.

Could a second celestial object in our solar system host living organisms? NASA says that its astronomers may have spotted water vapor plumes erupting on the surface of Jupiter’s moon Europa. Europa, which is about the size of Earth’s moon, is currently one of the most promising places to look for life in our solar system.

Using the Hubble Space Telescope, astronomers spotted plumes that were estimated to rise about 120 miles high and then rain back to Europa’s surface.

“Europa’s ocean is considered to be on the most promising places that could potentially harbor life in the solar system,” said Geoff Yoder, acting associate administrator for NASA’s Science Mission Directorate in Washington. Scientists hope that the plumes will allow them to gather water samples without drilling through the ice. If the findings are confirmed, Europa would be the second moon in the solar system known to spew water plumes. NASA also spotted “jets of water vapor and dust” off the surface of Saturn’s moon Enceladus in 2005.

Nasa says it hopes the infrared version of its new James Webb Space Telescope, which is expected to launch in 2018, will confirm the water plume finding on Europa. Could Europa be our future home?