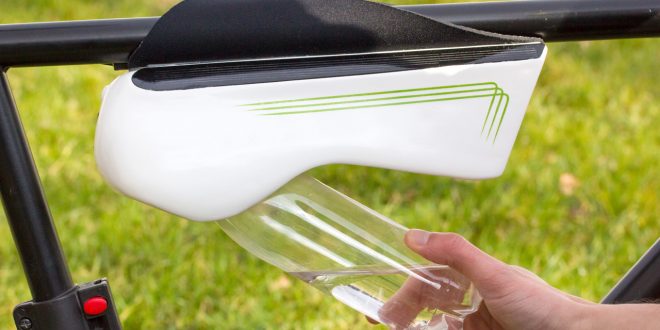 Water From the Air

Water is the most vital resource in the world, not only for humans for for life in general. Compared to saltwater, drinkable water is barely anything. Drinkable water is scarce indeed, and what better way to get some than to take it out of the air? Now, there’s a designer in Austria that wants to achieve just that.

Kristof Retezar is a designer that invented a cool little device that takes humidity from the air and condenses into fresh, drinkable water. The device is attached to a bicycle so that that cyclists can generate water during long rides.

Called Fontus, the device uses condensation, a basic idea that is used to make water from the air attach to things. For example, when you leave a cold drink out for a bit, you will notice moisture stick to the sides.

Fontus is solar powered, and uses a condensator, that works similar to a cooler, and is connected to surfaces that repel water. Thus, once the gadget takes in the air, and then the air gets cold, the water slides off the surface and voila.

Fontus can make half a quart of water in one hour, in what is considered “good” conditions (86-104 degrees Farenheit and 80-90% humidity).

The prototype includes a filter at the top to keep dust out, but until the final version comes out, potentially harmful bacteria is still an issue.

Previous Should We Go To College?
Next Scents that are good for you