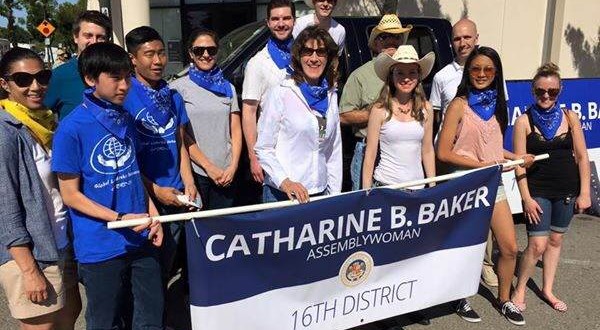 Walking in the Livermore Rodeo

The Livermore Rodeo is an annual tradition dating back to the early 1900s. Last Saturday, I had the wonderful opportunity of walking in its parade, as one of the supporters of Catherine Baker, the local assemblywoman.

The Rodeo has had a long and interesting history. The first rodeo was held in 1918 during World War II as a fundraising event to support the American Red Cross, and it was very successful. During the opening ceremony, or the “Grand Entry,” Universal Studios even filmed the event and made a newsreel shown across the country. Afterwards, in April of 1919, the Livermore Stockmen’s Rodeo Association was born, and since then, it has directed and hosted the rodeo, purchasing the land for use and organizing the riders and spectators.

My experience of this tradition was unfortunately limited to the morning of the parade. However, the parade was a great representation of the spirit of the people and the rodeo itself. All of the different groups and floats in the parade represented an integral part of the community, from the family night float to the high school marching bands to the government officials. Spectators sat in the shade of the trees on the sidewalk as the announcers called out the names and details of each entry.

As one of the people walking in the parade, I had a unique opportunity and perspective. Previously, I would only see the constituents from the outside, as a spectator. This time, I was able to understand better how the parade really worked. Before the parade even started, there was a lot of organization and preparation to be done, getting everyone in the proper order and ready to start walking. During the parade, there were many small nuances to keep an eye out for, such as speeding up or slowing down and distance between the groups. Finally, the way in which we walked was very important. As one of the banner carriers, I had to position it close to the middle of the road, and make sure it was level. Also, being friendly to the crowd was essential. We would wave to everyone, and Assemblywoman Baker even went over to some of the spectators and talked with them personally.

Walking in the parade was a great experience for me, and taught me an important piece of Livermore’s history. I feel honored to have been a part of this and hope to participate in it again next year.

Previous Graduation
Next The Truth Behind Coffee