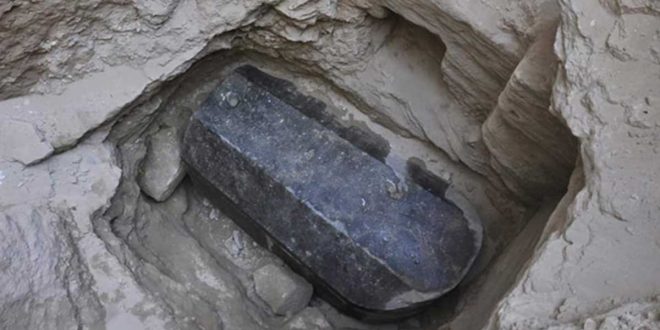 A large black sarcophagus was discovered in Alexandria, Egypt. Perfectly sealed, despite being 2000 years old, the mysterious coffin has been the target of wild speculations and wilder conspiracy theories.

Accidentally uncovered in a construction site, the sarcophagus measures five feet by nine. It has been dated by the Egyptian Ministry of Antiquities to the Ptolemaic dynasty, a period where a Greek family ruled Egypt beginning 323 B.C. Internet speculations have named the sarcophagus resident Cleopatra, the last Egyptian queen, Rameses, and even Alexander the Great.

The sarcophagus, when opened, held none of those near-mystical historical figures. It contained exactly three decomposed mummies in a pool of sewer water. One of the mummies seemed to have died of an arrow wound to the head, suggesting the three bodies to be the remains of warriors.

Instead of alleviating the mystery, the discovery opened a new chapter in the mysterious coffin’s history. The sarcophagus itself is carved from black granite, which is difficult and expensive to produce. Why then, were the three mummies buried in an unmarked grave with no belongings and inscriptions?

The contents are set to be forensically analyzed in the Alexandria national museum, where historians and archaeologists hope the results will clear the cloud of surrounding mystery.