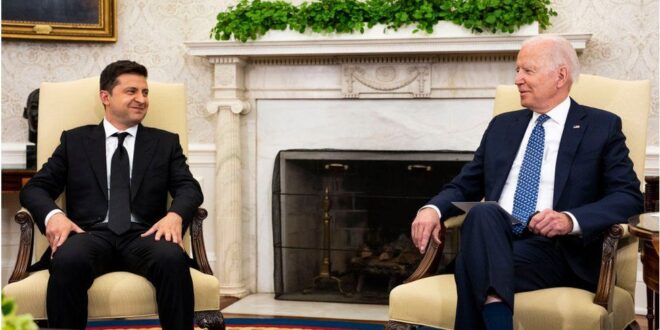 Three hundred days after the onset of the Russia-Ukraine war, Ukrainian President Volodymyr Zelensky landed in Washington D.C., for talks on what the next 300 days might look like for the conflict.

Shrouded in secrecy until the last minute, the historic visit was symbolic as well, from Zelensky’s plain dark green sweatshirt to President Joe Biden’s blue-and-yellow tie to the Ukrainian battle flag unfurled on the House floor.

However, the trip was much more than just symbolic. The face-to-face meeting between Zelensky and Biden shows that Biden believes that something substantial could be accomplished in the place of talking over the phone.

Emerging from their talks, both men clearly expressed that they understand the war is entering a new phase. As Russia is sending more troops to fight on the frontlines of Ukraine, and as it wages a deadly air battle on military and civilian targets alike, fears of the war becoming a stalemate have significantly grown.

However, as Zelensky departed Washington for a lengthy and risky return trip to Ukraine, it wasn’t clear that the pathway to a peaceful resolution to the conflict was any clearer.

Gaining clarity on where Zelensky stands when it comes to resolving the conflict was among the prerogatives in bringing him to the White House. The Ukrainian leader had previously expressed a desire for a “just peace” to end the conflict, a point that U.S. officials said would be at the center of their talks Wednesday.

However, on Wednesday, Zelensky used bellicose rhetoric that suggested that peace was not close, saying that the road to ending the war would not involve making concessions to Russia.

“For me as a president, ‘just peace’ is no compromises,” said Zelensky.

Previous Electronic waste and how it affects our environment.
Next Climate change makes it hard to find Christmas trees