Home / News / Ukraine at the Forefront of Asia Security Meeting 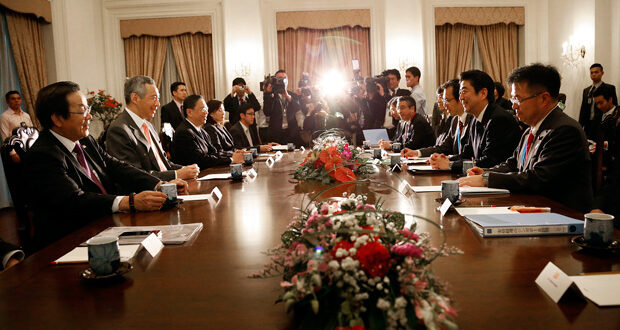 While the U.S. and its allies clashed intensely with China at Asia’s primary security meeting on Saturday, particularly on Taiwan, the focus of the meeting was dominated by the topic of the war in Ukraine and a remote speech by its President Zelenskiy.

U.S. Defense Secretary Lloyd Austin has said at the Shangri-La Dialogue, held in Singapore, that the U.S. will fulfill its role in managing tensions with China and preventing conflict in the Asia-Pacific region as Beijing exercises increasing aggression in the region.

Zelensky, speaking from an undisclosed site in Kyiv, told the delegates of the Shangri-La Dialogue that their nations’ help was crucial not only to defeat the invading Russian forces, but to preserve the rule-based order of the world, adding “It is on the battlefields of Ukraine that the future rules of this world are being decided along with the boundaries of the possible”.

He mentioned the Russian blockade of ports in the Black Sea and Azov Sea, keeping exports from the breadbasket region of Europe from reaching the markets of the world. “If … due to Russian blockades we are unable to export our foodstuffs, the world will face an acute and severe food crisis and famine in many countries in Asia and Africa,” Zelenskiy said.

Austin met with Chinese Defense Minister Wei Fenghe on Friday, and the pair reiterated that they wanted to develop a better relationship between the two countries, despite no breakthroughs being made to resolve differences.

Austin said that the U.S. would continue to support Taiwan over conflicts with China, which claims the island as its own, even vowing to take it by force if necessary. Austin also mentioned the “alarming” increase in the number of dangerous encounters between Chinese planes and vessels of other countries.

Taiwan has complained for years of Chinese military aircraft entering its airspace, with these incidents surging in recent months.

“There were many unfounded accusations against China. We expressed our strong dissatisfaction and firm opposition to these false accusations. The United States is trying to form a small circle in the Asia-Pacific region by roping in some countries to incite against some other countries. What should we call this other than confrontation?”