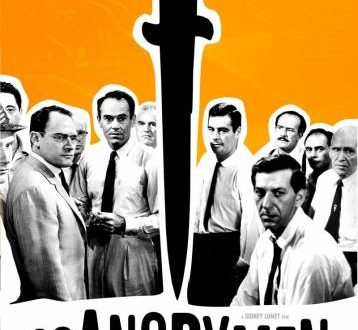 Sometimes my friends ask me: “Is there any film I really have to watch in my lifetime?” Before I watched 12 Angry Men, I always thought the answer to this question is no. However, after watching this movie, the answer is now a definitive yes. So, today I want to give you my thoughts on the film 12 Angry Men.

This film’s story almost entirely happens in a small room; it talks about a trial: a boy from a bustee has been accused of stabbing his father to death. Now, the jury has to determine whether this boy is guilty or not. At the beginning, there were 11 people who believed the boy is guilty, while only one person believed this boy was not guilty. The director uses 96 minutes to debate this and finally, the one man who believed in the boy won the ensuing debate and the boy is released.

Some of my friends asked me after they saw this film: “So who killed the boy’s father?” Unfortunately, I had to tell them they didn’t quite understand the film. This film was not about the mystery of the trial; this film was truly about the difference between ‘procedural justice’ and ‘resultant justice’. If the evidence is not conclusive, but all other factors point to the boy’s guilt, should we label this boy as a criminal? This film gives its viewers a lot to think about, even after the film has ended.