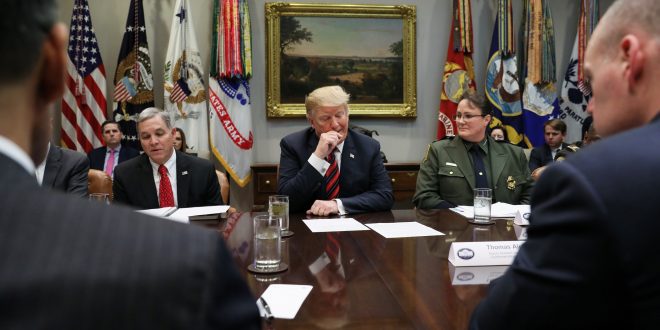 By a vote of 245-182, the House passed the resolution, setting up a vote in the Republican-controlled Senate where the resolution’s chances were slimmer, but seemed to be improving.

During floor debate, Democratic Representative Joaquin Castro, the main sponsor of the controversial legislation, said, “There is no emergency at the border,” adding, “Border crossings are at a four-decades low.”

While passage was a victory for Democratic House Speaker Nancy Pelosi, the tally was short of what she would likely need to override a possible veto by Republican Trump. Only 13 Republicans supported the move to stop the president’s declaration.

Democrats and some Republicans worry that with the emergency declaration unilaterally funding his border wall without lawmakers’ approval, Trump was presenting a dangerous challenge to the constitutional balance of powers between Congress and the executive branch of government.

McConnell said Republican senators and Pence held a “robust, vigorous discussion” and that he had not “reached a total conclusion” over whether Trump’s emergency proclamation was legal.

Previous A New Lease on Life
Next UCSC Strike