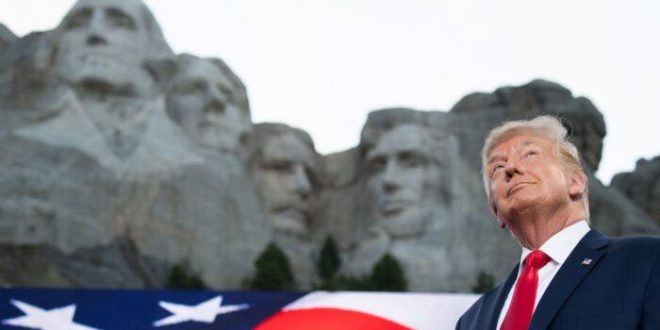 Trump Announces Plans for the Creation of a “Hero Garden”

In a speech at Mount Rushmore on Independence Day, President Trump announced his plans for the creation of a “National Garden of American Heroes”, which he described as a “vast outdoor park that will feature the statues of the greatest Americans to ever live”.

“The American people are strong and proud, and they will not allow our country and all of its values, history, and culture to be taken from them,” President Trump said.

“To destroy a monument is to desecrate our common inheritance. In recent weeks, in the midst of protests across America, many monuments have been vandalized or destroyed. Some local governments have responded by taking their monuments down,” said the executive order Trump signed into effect on the creation of the garden. “My Administration will not abide an assault on our collective national memory. In the face of such acts of destruction, it is our responsibility as Americans to stand strong against this violence, and to peacefully transmit our great national story to future generations through newly commissioned monuments to American heroes.”

The order mandated the creation of a task force responsible for developing the plans for the garden. The order also stated that the garden would be available for public access no later than July 4th, 2026.

“Our nation is witnessing a merciless campaign to wipe out our history, defame our heroes, erase our values, and indoctrinate our children… Their goal is not a better America. Their goal is to end America,” he said. “In its place they want power for themselves. But just as patriots did in centuries past, the American people will stand in their way and we will win and win quickly and with great dignity,” President Trump said, going on to talk about the protests taking place in many major cities across the United States.

Previous Controversial Washington Redskins Name Asked to be Changed
Next What Causes Us to Form an Opinion?