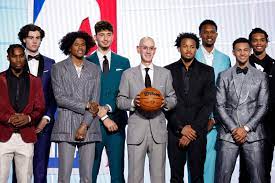 Wagner has been a standout for the Magic this season, fitting into a role that the Magic need as a solid all-around player. He earned a career-high of 38 points against the Bucks and has been playing more minutes than any other rookie in the draft class. Wagner and his crew of young guns in the Magic will be seeking to solidify themselves as the best young core in the NBA in the coming months.

Scottie Barnes was arguably the most underrated draft pick on draft night, showing up immediately as an NBA-ready prospect. Many Raptors fans were seeking their team to choose point guard Jalen Suggs and were disappointed when receiving Barnes. Yet, Barnes has arguably been the most impactful rookie this season, adding depth, athleticism, and a whole lot of scoring for the Raptors.

Evan Mobley has been key in the Cavalier’s current fourth seed spot, with his elite rim defense, strong mid-range shooting, and overall gel with the Cavs team. Mobley will be key to the Cavs if they seek to make a deep playoff run.

Cade Cunningham has been a bright spot in the Piston’s shoddy record. Seeing flashes of the superstar potentially inside, Cunningham still struggles with consistency and turnovers. Continuing to develop his shot and basketball awareness will do wonders for him the rest of this season.

Josh Giddey has been another underrated player in the draft class. His basketball IQ and awareness are some of his top qualities, having a game with 10 assists and 10 rebounds. Yet, notably, this game he also had a shocking 0 points, highlighting the largest deficit in his game — a solid jumper. If he continues to develop his shot, Giddey will be a solid player for years to come.