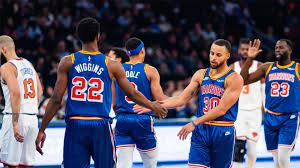 The Warriors have had an unexpectedly good season this year, with most prospects putting them in the range of the 4-9 seed in the West. Much of this improvement has to do with the addition of much depth in the bench, a gift from GM Bob Myers in the front office. Along with Steph Curry doing Steph Curry things, averaging 27.7 points per game and playing at an overall MVP level, and Draymond Green playing at a DPOY level, the stars have not been disappointing. With Andrew Wiggins developing into a fringe all-star, Poole becoming one of the top players to come out of the 2019 draft, and new veteran additions of Gary Payton II, Nemanja Belijica, and Otto Porter Jr, the Warriors are one to fear this season. All of that mentioned, superstar Klay Thompson still waits on the wings during the last stint of his injury, and number 2 pick James Wiseman will be returning in the next few weeks.

The Suns continue to play at the elite level they have been ever since last season, holding down the second seed in the West. Devin Booker has been having a top-tier season, holding down his position as a top 3 shooting guard in the league. Chris Paul, averaging an astounding 10 assists per game, has facilitated his team with veteran leadership and general play-making that has made the entire team better. Bigs DeAndre Ayton and Javale McGee have been astounding for the Suns this season, yet in order to compete against small-ball teams like the Warriors, they may need to look for a small-ball 5 option before the trade deadline.

The Jazz, Suns and the Warriors are currently in a three-way race to the first seed in the West. The all-star duo of Donovan Mitchell and Rudy Gobert is one of the most dangerous pick-and-roll combinations in the league. Gobert and Hasan Whiteside are also some of the best center-tandems in the league, not to mention 6MOY Jordan Clarkson and top shooters Bojan Bogdanovic, Mike Conley Jr., and Rudy Gay.  Yet, while the Jazz has been consistently good the past six years, they have never made it past the Western Conference Semifinals. This season, the Jazz might look to trade for a strong wing-defender to make up for their deficits last year in the post-season.

The Nets have been having an interesting season as of late. Falling to the second seed in the West after a push by the Bulls, led by Demar Derozan, the Nets have been struggling to work around their deficits. Even with Kevin Durant playing at MVP level on incredible efficiency, and James Harden bringing himself back to all-star level after a shaky start to the season, the depth in the lineup is definitely one to be worried about. One shining light in their prospects is that Kyrie Irving will be returning to the line-up as a part-time player, only able to play in away games in cities allowing non-vaccinated players to play. The team will have to learn to maneuver around this, but if they can, the Nets will only get better as their big three come to play together once more.

After a slow start to the season, the Bucks have been showing why they are the reigning NBA champions, pushing back up to the third seed in the East. Giannis Antetokoumpo has arguably been playing at a level even better than last season and is another potential competitor for the MVP award this year. Khris Middleton and Jrue Holiday round out their big three, and with all three of them playing, the team is 15-2, a potential 72 win pace for the whole season. However, with Brook Lopez out for the foreseeable future, the Bucks may need to take a look at his condition and evaluate whether they should invest in another center. While DeMarcus Cousins has been holding down the fort, having another big man option during the post-season may be worthwhile.

Previous How to start Putting on Makeup
Next Russian, American Diplomats Meet in Geneva