Home / Lifestyle / Tis the Season of Getting, Giving, and Giving Back 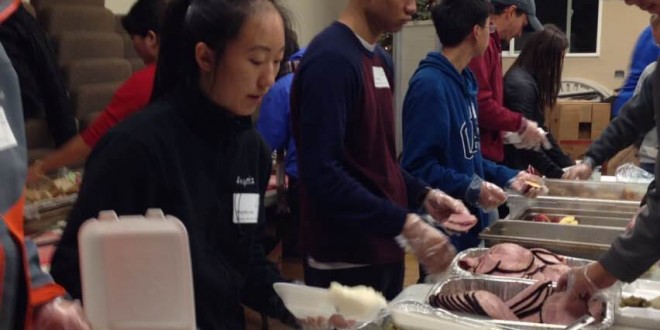 Tis the Season of Getting, Giving, and Giving Back

There is a greater joy to Christmas than materialistic gifts can give. It is a joy that stems from the heart, that inspires souls, one that can be given to anyone and by everyone. This is the joy that comes from helping others.

This Christmas Day, Global Leadership Initiative (GLI) gave a gift worth more than any money can buy: the gift of love. GLI took part in the San Francisco City Impact holiday event by helping serve food to the needy in the tenderloin district, a poor neighborhood with a high crime rate. San Francisco City Impact is a Christian organization that gives help and guidance to the people of the inner-city. In addition to its popular holiday events, the group also provides healthcare and education in order to lead them to a brighter future.

Hundreds of volunteers flocked to the city to help out – some came from as far as Rhode Island and even Singapore. It was truly amazing to see such dedication and effort put into wanting to make a difference in the (and not even their own) community. After an inspirational briefing session, in which the volunteers were imbued with the mantra that they were equal to the people they served, the group was split into several different factions, including meal prep, kitchen work, meal delivery, and clothing, toy, and grocery giveaway.

I spent most of my time behind the scenes, putting the meals together and packaging them to be distributed. The food bins were spread out in an assembly-line fashion, and about 8-10 people worked on one meal, allowing the process to be executed efficiently and neatly. We went through huge bins of food in minutes: mashed potatoes, salad and dressing, green beans, ham, turkey, bread, brownies, cookies, and other goodies that would provide a healthy, balanced meal. The people I worked with were so kind and caring; this was not their first time with San Francisco City Impact, unlike me. It was inspiring to talk to people with such good hearts and values who genuinely cared about giving back to their community.

For the first time ever, San Francisco City Impact hosted a sit-down event in which the people of the tenderloin district could come out, sit down, and enjoy a hot meal. The restaurant-styled seating was set up in the middle of a blocked street, and volunteers were encouraged to talk to some of the people and get to know them on a more personal level. What tangible object could be better to give than the gift of friendship? Seeing the smiles that lit up on the people’s faces when someone actually took the time and effort to talk to them was priceless. Now this was the true joy of Christmas.

Almost 700 people were served hot meals at the two sit-down sites. In 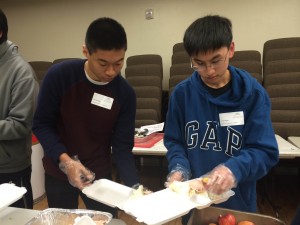 addition, over 3,000 meals were delivered around the district. However, the outreach did not just stop at food. About 180 kids were given toys, 400 people received clothing, and another 400 were given groceries. That is thousands and thousands of lives that have been touched in just one day with the help of only a few hundred volunteers. I am thankful for the opportunity to have such an immense impact on so many lives.