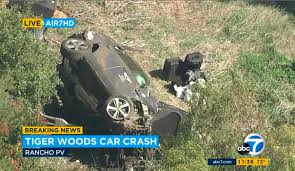 Tiger Woods was found unconscious in his car which had fallen off the highway interpass. Woods has had something like this occur before in 2017, where he was almost unconscious at the wheel, saying that he had taken several prescriptions. But, this time, he was sent to the hospital after breaking multiple bones all along his body. Even though Tiger Woods taking pills when driving was a possibility, the sheriff’s department said that there was no evidence of this.

Woods was found by a local resident who had heard the crash and walked up to the SUV. He asked Woods questions, and later said that he believed Woods to be unconscious for he was unresponsive to his questions. The Sheriff told reporters that he had not requested a blood sample to check for drugs and alcohol, but a judge had approved for the warrant. The Sheriff did not disclose what they found yet.

It was around 7 a.m. when the crash occurred. Woods was crossing through two oncoming lanes and hit an uprooted tree. This was said to be “purely an accident” by Sheriff Alex Villanueva, but Woods could still face a misdemeanor driving charge. Right now everyone is more focused on his recoveries after multiple surgeries.

Dr. Anish Mahajan, who is the chief medical officer for UCLA Medical Center said that Woods suffered comminuted open fractures as well as breaking in the upper and lower parts of his legs. All we know now is that he is “awake, responsive, and recovering,” according to a statement made by Mark Steinberg.

Woods had just come off of a back injury, making his way to win the PGA tour against all odds. Not only could this end his career, but it could change the entire golfing world forever. His impact to the game with both skill and innovation gave the game new meaning. He is a golf legend who many look up to.