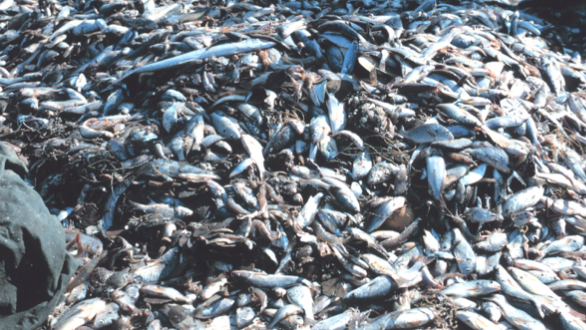 Overfishing is defined as when more fish are caught than the ones that the population naturally replenishes. Although some may believe that this will only benefit the economy as it brings more profit, overfishing actually has huge consequences on the environment.

Why is this a big problem?

Some of the negative effects that overfishing has include: the imbalance of the ecosystem due to the decrease in prey, and threats to the social and economic well-being of coastal communities that rely on fishing (“Overfishing”). For one, marine animals that are the top predators in the food chain, like tuna, are being targeted. With a lesser number of predators, the number of smaller fish at the bottom of the food chain grow quickly. This also leads to an increased growth of algae, which is normally balanced by marine animals at the middle or top of the chain. Overall, overfishing completely upsets the marine life balance.

Second, several coastal communities rely on fishing as their main source of food and revenue. Indigenous groups such as the Bajau Laut, which lives on the coast of Malaysia, Philippines, and Indonesia, rely heavily on fishing. This group has historically been maritime traders but are facing rising competition among big fishing companies (Ota). Communities such as the Swinomish Indian Tribal Community rely on fish for ceremonial practices. Lorraine Loomis, the fisheries director in the community, said that “salmon feasts marked every phase of life on the reservation north of Seattle — naming ceremonies, weddings, funerals, [and] memorials to the dead” (Fears). Evidently, fishing is involved in multiple communities and plays a big role in the ceremonies of the indigenous people. Overfishing will only cause smaller communities to run out of fish, and threaten the well-being of those coastal communities.

What are others doing to help?

In order to help with the effects of overfishing, the World Wildlife Fund partners with the Marine Stewardship Council. Together, they help “fisheries qualify for MSC certification” (“Overfishing”). Furthermore, WWF help retailers worldwide to source from MSC certified fisheries. This way, they can make sure that the products they sell come from sustainable fisheries that meets MSC standards. More endangered fishing areas, also called Marine Protected Areas, are created and expanded to protect a larger area of marine life.

What can you do?

As a consumer, you can influence big companies. Avoid eating big fish, such as tuna, and eat small fish instead. Because fish farms actually harm the environment, buy local, wild fish instead. Look for a sustainable seafood seal of approval when buying fish yourself, and ask the restaurant if its fish was caught sustainably when eating out. Of course, you can always join campaigns and support organizations.

Fears, Darryl. “Indigenous Peoples of the World’s Coastlines Are Losing Their Fisheries – and Their Way of Life.” The Washington Post, WP Company, 2 Dec. 2016, www.washingtonpost.com/news/energy-environment/wp/2016/12/02/coastal-native-people-who-need-fish-the-most-are-losing-them/?noredirect=on&utm_term=.209e050bab38.