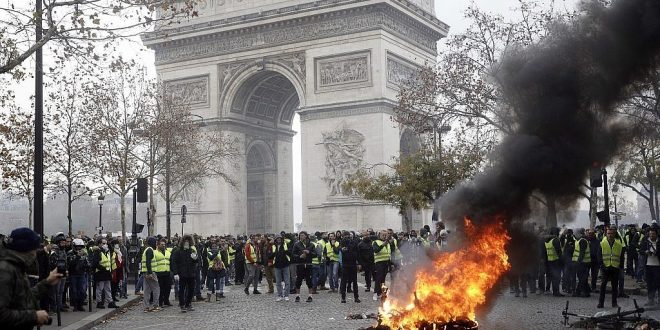 On November 17th, people in Paris began protesting the taxes passed by the French president, Emmanuel Macron. Four protests have already taken place. These protests were led by the “gilet jaunes”, otherwise known as the “ yellow jackets” or “yellow vests”.

Over 10,000 people gathered to protest, causing Paris to go on a lockdown. The protests became more violent, as several vehicles had been set on fire, and a few people took advantage of the protest to break into stores.

Police used tear gas, stun grenades, and rubber bullets to try to stop the riots. During the most recent protests, 1385 people were arrested and 135 were injured, although most only sustained minor injuries. 17 of the people injured were police officers.

The protests were caused by anger at the president for the increasing taxes. Some of the working class citizens are not able earn enough to support themselves due to the taxes, while others remain relatively unaffected, causing unbalance among the people. Many protesters want Macron to resign.

In response to the protests, Macron stopped the tax on gas fuel, but the most protesters still want more of the taxes to be cut. According to recent polls, 80% of the people support the protests, and 74% have derogatory opinion about the president.

Previous Real or Fake?
Next The Dark Web