Home / News / The Two Koreas: What Happens at the End of an Era? 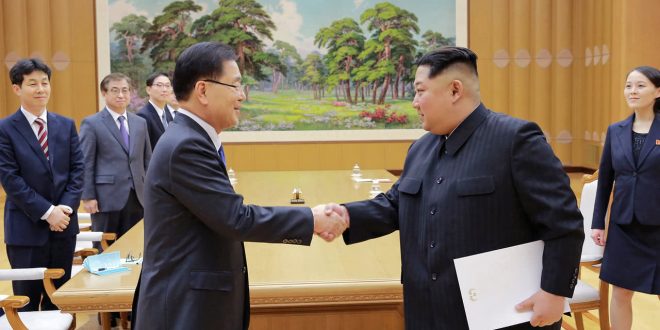 The Two Koreas: What Happens at the End of an Era?

In striking contrast to the hostile environment the world witnessed just a few months prior, North Korean Supreme Leader Kim Jong Un and South Korean president Moon Jae-in united warmly at the line where the two Koreas are split in two. In a historic summit, Kim stepped over the military demarcation line, effectively becoming the first North Korean leader to step over the border since 1953. Prompted by Kim, Moon followed by briefly stepping into North Korean territory. Smiling and embracing after years of distrust and hostility, the leaders of the Koreas participated in a symbolic tree planting ceremony: the tree originated from 1953, marking the year the Korean War armistice was signed.

Kim and Moon went on to sign the Panmunjom Declaration for Peace, Prosperity and Unification, thereby committing to denuclearization and negotiations for a formal end to the Korean War. They conversed casually on a bridge in the woods of the DMZ, drinking tea away from the flashes and microphones of cameramen. A formal dinner and toast concluded the historic summit, along with a Korean singing performance and an elaborate light projection on the side of the peace house.

Suspicious of the unreal calm between the two Koreas, many people have expressed skepticism over the ongoing peace. The recent summit seems to some to be another step in the cycle that has repeated itself for ages; when the excitement dissipates, North Korea will have held on tightly to their nuclear weapons, diplomacy will crumble as it has before, and the threat of war will return to loom threateningly above us. North Korea has lied on multiple occasions, and many believe its current behavior is just another elaborate fib.

Others also point out that the summit seems to echo the euphoria over the 2000 meeting between the then South Korea president Kim Dae-jung and North Korean leader Kim Jong Il in Pyongyang. However, the so-called “Sunshine Policy” diplomacy birthed then is now widely regarded as a failure. In retrospect, North Korea continued to neglect its citizens, and it did nothing to reduce its beloved nuclear programs. Even worse, it was soon revealed that Kim was bribed with 500 million to put on the show.

At this critical point, Trump’s behavior is significant in determining the outcome of this fragile situation. With Moon and House Republicans dangling the prospect of a Nobel Prize before his nose, it is tempting for Trump to reach for a fast end to the conflict and claim his prize. Some suggest reasonably that Moon is flattering the U.S. president in hopes of encouraging increased flexibility during negotiations. However, analysts stress that Trump cannot give in, and instead must be prepared to leave the negotiating table if a stalemate results. In fact, Trump has stated that if he senses failure during talks, he will respectfully walk away rather than just bending further backwards. In the event that Kim is lying to Trump just as his father did a generation before, some contend that Trump must express that he is serious about military force if negotiations fall apart. Giving in too easily could only mean he has fallen for Kim’s trap.

The historic events currently unfolding in the two Koreas are a sudden U-turn in the road that has been taken for the past few decades. Although some feel relief and excitement at the seemingly positive development, others are rightly suspicious of any hidden underlying motives that may plunge us back into the vicious cycle we have become uncomfortably used to.