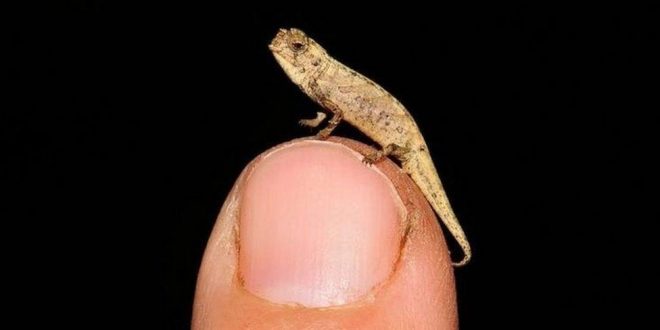 The smallest reptile on the planet has been discovered

A chameleon subspecies, discovered in Madagascar, may be the smallest reptile on Earth, being the size of a seed.

Two of the chameleons were found during a German-Madagascan expedition. The male nano-chameleon (often referred to as Brookesia) had a body size of just 13.5mm with a length of 22mm. According to the Bavarian State collection of Zoology in Munich, this makes it the smallest reptile in a pool of over 11,500 known species.

The female Brookesia, on the other hand, was much bigger than the male, with a body of 29mm.

Although the species was just recently discovered, scientists say that this chameleon species may be facing extinction as it is known to exist only in a degraded montane rainforest in northern Madagascar.

Oliver Hawlitschek, a scientist at the Center of Natural History in Hamburg, added that the chameleons’ habitat has been subject to deforestation. However, he says that because the area has recently been placed under protection, the species will survive. To further protect the species, scientists have recommended listing the chameleons as Critically Endangered on the IUCN Red List of Threatened Species.

The chameleon hunts for mites on the rainforest floor and usually hides from its predator at night.

Something puzzling is that the forest where these chameleons live is connected to the north of the island, violating the generally accepted rule that small species inhabit small islands. This suggests, according to the scientist, that another factor is causing the chameleons to miniaturize.