Home / Opinion / The Role of Trends in Activism 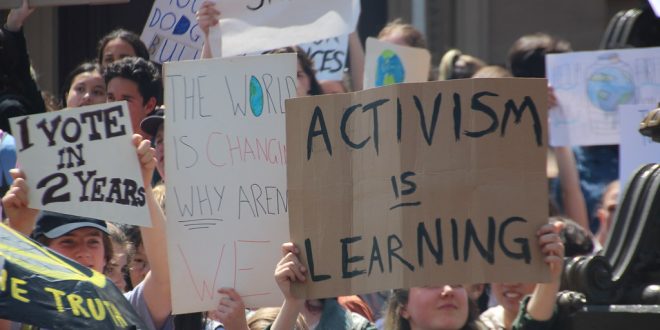 The Role of Trends in Activism

With the rise of social media, it seems that political activism trends are here to stay. Whether it be the Sudan crisis, the push to increase gun control, or the Black Lives Matter movement, different political movements all seem to have one thing in common: their prevalence all over the internet. This form of “publicity” takes form in numerous ways; for example, people could be switching their profile pictures all to the same image (the BLM fist or the blue picture for Sudan), reposting images or posts to increase awareness and detail ways to help, or participating in social media trends such as the current #BlackoutTuesday. Whatever its form, activism trends always follow the same pattern: starting from very little publicity or posting, it suddenly goes viral and it seems like every single person you know is posting about it, and sooner or later, it dies out.

At first glance, it’s easy to see why these trends could benefit activists. If people are posting about a certain crisis and increasing both awareness about the issue and its possible solutions, more people will catch on and do the same thing. Thus, an exponentially increasing number of people will continue to jump on the trend, allowing a greater circle of people to know about the issue. That’s good, right?

But what happens within a few weeks, or a month? The trend dies down, and all of a sudden, it’s like nothing ever happened. The world moves on to something else, and the old trend is left behind. In some cases, you might say, the issue at hand probably passed. Like the Amazon rainforest fires, right? Actually, as of May 2020, deforestation in Brazil has surged, leading Greenpeace to conclude that we are headed for “more record-breaking fires and deforestation.” And yet where are all the sympathy and donation posts from many months ago?

We need to evaluate why we decide to repost the pictures and stories and participate in the trends that might affect issues that actually matter. Are we really doing it because it’s the first time we’ve heard of that problem and because we genuinely care? Or are we doing it because we feel like we need to fit in or engage in performative activism? Since everyone else is doing it, are we feeling guilty about remaining silent, or do we want social approval by flaunting our altruism? Why is it that people only seem to care about things like equal rights or gun control when it’s popular to make posts about it?

That could be a good thing, you might say: to peer pressure people into making positive change. But this change isn’t permanent; in fact, it could hinder future progress. Having someone do anything remotely helpful and then, after the trendiness dies down, having them feel accomplished while the issue still rages on in the background is utterly counterproductive. We become dangerously complacent while people still suffer behind the scenes. In order to truly make a change in the world, we must both reevaluate our motivations and be persistent when choosing to voice our support for a cause.