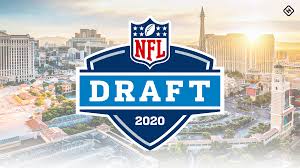 On April 23rd, in the midst of the Covid-19 pandemic, the National Football League, or NFL, held its annual draft of new players from the best of American college players.  While an annual event, this year’s draft was notable for being hosted remotely for the first time ever. The players and team representatives all remained at home and connected via the internet to meet shelter-in-place requirements. The draft was hosted online by ESPN personality, Trey Wingo, for the fourth consecutive year. This year’s draft, like the 2019 draft, had a very impressive roster from Heisman trophy winning quarterbacks, to top of the line defensive lineman.

In the AFC (American Football Conference), Heisman Trophy winner, Joe Burrow, was drafted by the Cincinnati Bengals. As a high schooler, Burrow had been recruited by the Ohio State Buckeyes, where he sat on the bench as a substitute to a variety of quarterbacks. Feeling his talents were not appreciated by the Buckeyes, he made one of the best decisions of his life and transferred to Louisiana State University where he had not only his best season, but possibly the best season of any college quarterback in history. He threw for 5671 yards in one season as well as having a 76.3% pass completion rate with only six interceptions leading the LSU Tigers to a 15-0 season. His impressive stats and perfect season made him the obvious number one pick in the 2020 NFL drafts. Coming off a terrible 2 win -14 loss season, the Bengals head coach, Zac Taylor, seized the opportunity to rebuild the team around Burrow, releasing the Bengal’s former starting quarterback Andy Dalton after Burrow was drafted.

In the NFC (National Football Conference), wide receiver Ceedee Lamb was drafted by the Dallas Cowboys. In Lamb’s senior year with the University of Oklahoma Sooners football team, he put up over 1300 running yards, as well as having 14 touchdowns, a top five scorer in all college football. His great route-running compensates for his lean figure. Lamb will be coming into a near-perfect situation with the Cowboys, as he isn’t being asked to be “the guy.” More often than not, when a wide receiver is taken early in the first round, they are coming into a situation where the team needs a top-tier playmaker who will make (or break) their offense. With Dallas, Lamb will get his opportunities, but he joins a team with veteran 1,000-yard rusher Ezekiel Elliott, and two receivers, Amari Cooper and Michael Gallup, who finished with 1,000 yards and six-plus touchdowns last year. Lamb will bring even more depth to a great Dallas backfield which saw injuries rob them of a title last year. Overall, he was a steal in the draft and will make the Cowboys that much more dangerous.

There are many great players coming into the 2020-2021 NFL season. Chase Young to the Redskins, for example, is known for being a deadly defensive linemen. My favorite, Michael Pittman Jr., another great receiver who was the first to be drafted to the Colts. This year has many great hopes and expectations for these great players. These players are poised to make their mark on the upcoming season and will hopefully bring the excitement with them.