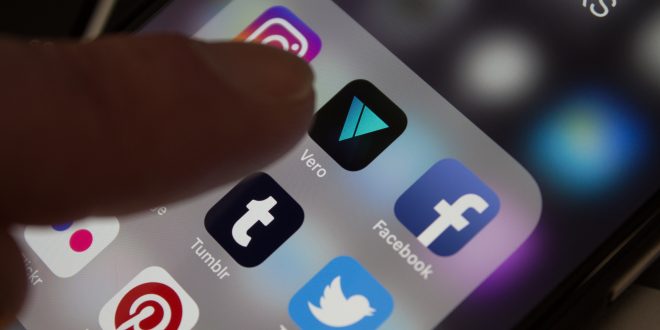 DUSSELDORF, GERMANY - FEBRUARY 27: In this photo illustration, a surge in new users cause technical difficulties for users of the VERO app on February 27, 2018 in Dusseldorf, Germany. Recent changes to Facebooks algorithm, controlling what users see on their newsfeeds, has caused many to sign-up for the app billed as the next Instagram. (Photo by Ant Palmer/Getty Images)

Facebook. Instagram. Snapchat. From the familiar logos the friendly interfaces, these apps are instantly recognizable. However, these popular apps do have their flaws. Users frustrated with the increasing amount of ads on Instagram or the new Snapchat update have turned to Vero as an alternative.

Vero is a social media app similar to Instagram. Unlike Instagram, users can choose to share their posts with select circles, unlike Instagram’s all or nothing account setting. Vero also allows users to share books and movies with friends, and provides a platform for less well-known artists to spread their work.

Although Vero was created in 2015, it has had a relatively small user base until this year. Frustrated with other social media services like Instagram, cosplayers, artists, and photographers recently started posting pictures of their creations, and the Vero user count began to grow rapidly.

Users have encountered problems such as not be able to load the app, and many report that usernames are not loading. Vero claims these problems are due to popular demand for the app, and that they will be fixed shortly. Additionally, Vero’s terms of use have dissuaded many potential users, as they claim the right to “use, reproduce, modify … your user content.”

Vero CEO Ayman Hariri has also come under scrutiny. The billionaire son of assassinated Lebanese prime minister Rafic Hariri, he has been accused of supporting Saudi Oger, a construction company that has been shut down due to poor employee treatment.

Despite this, Vero has nearly three million users, and hopes to expand even more. Vero claims they will remain ad-free, but they will charge a small subscription fee. However, Vero will give the first one million users free usage for life.

Previous Syrian War: At Least 70 Killed in Suspected Chemical Attack in Douma
Next Fumes of Fire