Home / Health / The Importance of Iodine 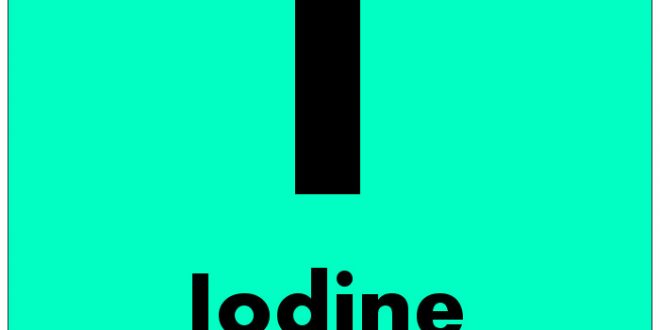 The Importance of Iodine

Everyone has heard of the dietary requirements each day for carbohydrates, fats, and protein, but the body’s requirement of iodine is just as important. Iodine is a trace element in our bodies that needs to be replenished through eating foods such as seafood and cow milk. Iodine is necessary to synthesize thyroid hormones. If there is a lack of iodine in the body, iodine deficiency diseases, such as goiter, can result.

Goiter is a disease that affects 187 million people throughout the world, about 2.7% of the entire human population. There are some areas that are highly affected, including most of Africa, Mongolia, and areas away from modern day civilization, such as Tibet. These areas are unable to get access to foods that contain iodine. Iodine deficiency causes a low amount of thyroxine to be produced, causing thyroid stimulating hormone (TSH) to increase in concentration. The result is a thyroid gland that swells larger than normal.

There are signs that may indicate that one has iodine deficiency, including difficulty in breathing, swallowing, and coughing. An overactive thyroid gland that results from goiter may also cause signs to appear such as nervousness, increased sweating, fatigue, and weight loss. Iodine deficiencies may also cause complications in pregnancy, and developmental issues of children from these pregnancies. The children may have mental problems, slow growth, and speech and hearing problems.

Luckily in the United States and many other developed countries, there are few extreme cases of iodine deficiency. This is because starting in 1920, the United States government pushed companies that produced salt to add iodine. The change was relatively smooth, because adding iodine to the salt was a negligible cost, about three cents per ton. Along with salts containing iodine, eating an iodine-rich diet is necessary. Moreover, if iodine is not sufficient from the diet, iodine supplements may also be necessary.

While there may not be many extreme cases of iodine deficiency throughout the world, iodine deficiency still may be widespread. The World Health Organization approximates that nearly 72 percent of the world’s population is iodine deficient in some amount. These iodine deficiencies may cause low energy, depression, dry skin, poor immunity, and muscle weakness. Therefore, people of all ages should be educated about the importance of iodine. When the risks are understood by the masses, the resulting problems will consequently be alleviated.